Join us at the Wiley Planetarium this fall for a series of 10 public planetarium shows. Our ‘launch-off’ show for the fall series is free to all attendees, and will be held on Saturday Sept. 17 at 2:00 PM and 3:30 PM.  During this live show, attendees will learn about what’s visible in the sky this week and see the very first images taken by NASA’s James Webb Space Telescope as explained by Wiley Planetarium Director and astrophysicist Dr. Maria Weber.

Webb is the largest and most complex space science telescope ever built – the premier observatory for the next decade. This international mission, led by NASA in partnership with the European and Canadian space agencies, launched on December 25, 2022.

The Webb telescope provides a new view of the cosmos and pushes the field of astronomy into a new era. Since its launch, the telescope has already observed the deep universe in the infrared, peering inside dust clouds to study light from distant parts of the universe for the very first time – the first galaxies that formed about 13.5 billion years ago. It has also explored distant worlds in other solar systems, as well as objects in our own solar system. We’ll learn all about this in Saturday’s planetarium show!

To learn about Wiley Planetarium’s other upcoming shows from now until December, visit https://www.deltastate.edu/planetarium/#upcoming or contact Dr. Maria Weber at (662) 846-4478. Wiley Planetarium is also available for daytime school visits and private events. 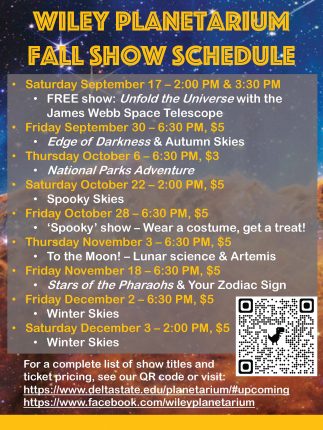