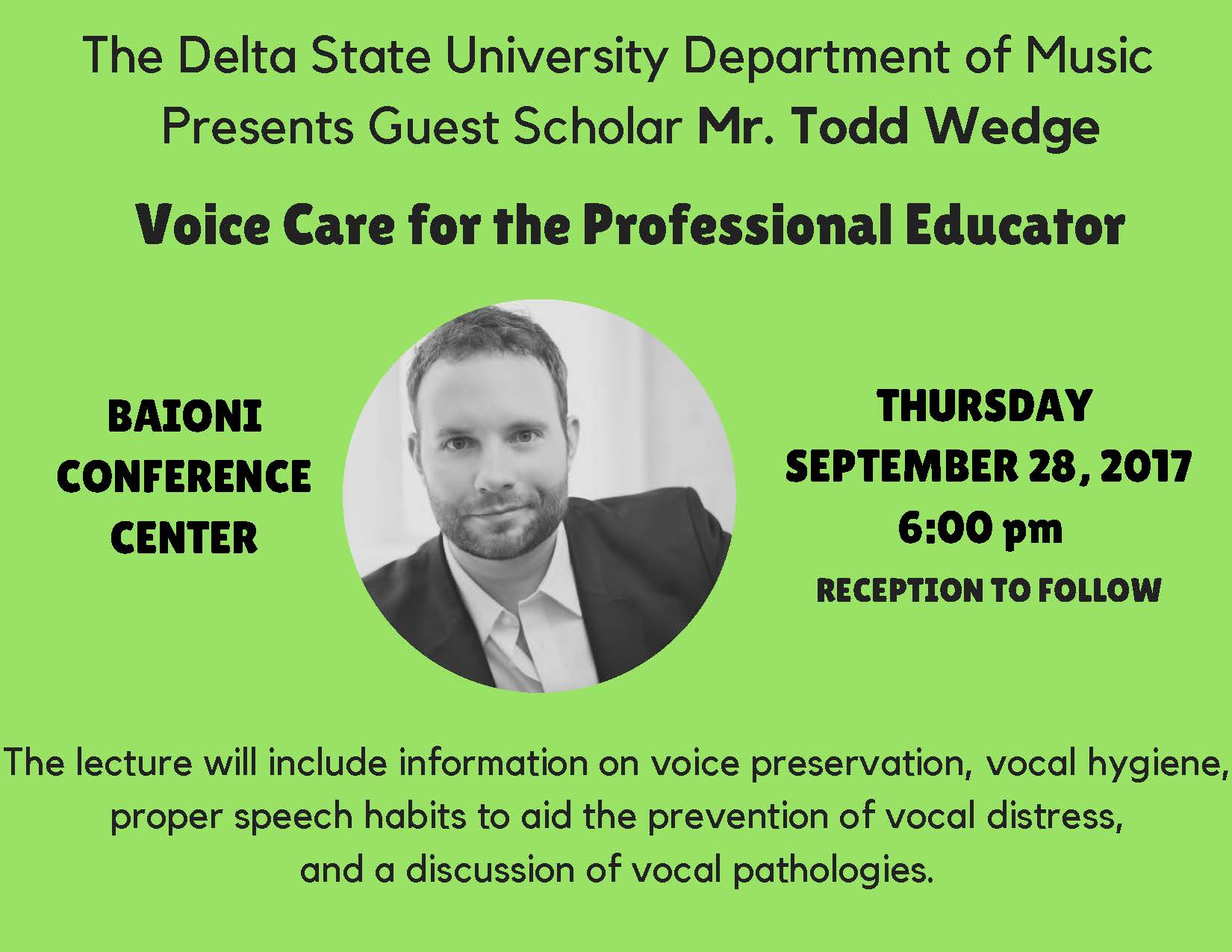 On Sept. 28 at 6 p.m. in the Baioni Conference Center, Todd Wedge, a vocal pedagogue and associate professor of voice at Kennesaw State University, will present a lecture on this topic and will focus on vocal health and hygeine, vocal pathology awareness, and modifications that can be made in the classroom to help teachers prevent vocal distress.A recent clinical study of professional educators performed by the American Academy of Otolaryngology published the following results: 58% of professional educators report voice difficulties at some point during their career, nearly twice the incidence of the general population; 47% of American teachers experience voice trouble daily; 1 in 10 teachers has been forced out of the profession because of vocal difficulty. Wedge received his Bachelor of Music degree from the Oberlin Conservatory of Music and furthered his studies with a Master of Music in Vocal Performance and Literature from the Northwestern University Bienen School of Music. In 2015, Wedge was invited to join the voice faculty at Kennesaw State University where he is currently an assistant professor of voice. Prior to this appointment, Wedge was the director of the Vocal Music Department at the Ruth Asawa San Francisco School of the Arts — a public arts magnet school that specializes in pre-conservatory curriculum for both classical voice and musical theater.

He has been the fortunate recipient of awards from the Friends of Austria Lieder Competition, American Opera Society, Bel Canto Society, and the Loretta Kearns Award for Excellence in Music Education. In 2013, Wedge was selected by the San Francisco Classical Voice as “Music Educator of the Year,” which lead to a nomination for the GRAMMY foundation “Music Educator of the Year,” for which he was a semi-finalist. In 2014, he was nominated for the San Francisco Mayor’s Teacher of the Year Award and was selected to be a National Endowment for the Humanities Summer Scholar in Vienna, Austria where he focused his research on the operas of W.A. Mozart.Wedge is frequently featured as the tenor soloist in the oratorio works of Handel, Haydn, Mendelssohn, Bach, and Mozart, while also maintaining a robust recital schedule. He was a young artist with the Chicago Opera Theater while also serving on the faculty at the University of Notre Dame School of Music and St. Xavier University where he taught studio voice and vocal pedagogy. Shortly thereafter, he was invited to join the GRAMMY award-winning men’s ensemble Chanticleer. Over the course of these three life-changing years, Wedge helped bring audiences to their feet in over 200 cities and 13 different countries in some of the world’s most prestigious concert halls. In addition to the rigorous touring schedule, Wedge also spent considerable time in the recording studio and can be heard on the following albums: And on Earth, Peace: A Chanticleer Mass; Let it Snow; The Best of Chanticleer; A Chanticleer Christmas; The Mission Road-Our Journey Back; (DVD & CD), and The Singing Life (DVD).Wedge currently maintains a private vocal studio in Atlanta, Georgia and is frequently seen as a recitalist, guest conductor, lecturer, and clinician in the Bay Area.