By knormanFebruary 27, 2019College of Arts and Sciences, Press Releases 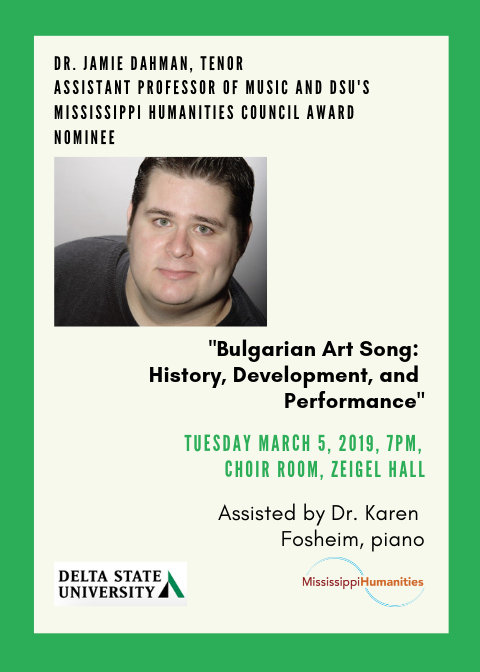 Assistant Professor of Music Jamie Dahman’s interest in the Bulgarian art song enriches not only himself but also his Delta State University colleagues. Case in point: Dahman earned Delta State’s 2019 Humanities Teacher Award from the Mississippi Humanities Council for his work in the field. Dahman will give a related lecture-recital, “Bulgarian Art Song: History, Development, and Performance,” for which he won the award, at Delta State on Tuesday, March 5, 2019, at 7 PM in the Choral Rehearsal Room in Zeigel Hall. The event is free and open to the public. Dahman also will travel to the Old Capitol Museum in Jackson on April 5 to be recognized at the Mississippi Humanities Council’s Public Humanities Awards.

“I was fortunate to have been a Fulbright Fellow from January 2012 to May 2012, and while studying at the Academy of Music, Dance, and Fine Art in Plovdiv, Bulgaria, I was able to compile several collections of Bulgarian classical song,” said Dahman, who joined Delta State in 2016 and teaches applied voice, lyric diction, and vocal pedagogy. “From those, I curated a volume of Bulgarian art songs called Bulgarian Art Song in the original Bulgarian with English translations. I’m happy anytime I can share this music with an audience. It deserves a place alongside the standard vocal repertoire for a singer.”

Dr. Karen Fosheim, professor and chair of the Department of Music, agreed. She’s one of those who nominated Dahman for the annual awards that are presented to humanities faculty members at Mississippi colleges and universities. “He has made an important contribution to the vocal music canon through his scholarship,” she said, because “this literature is not widely known or available outside of Bulgaria.” Fosheim added that the music is “beautiful, intricate, and artistically interesting.”