Delta State’s herbarium collection to be used by Smithsonian 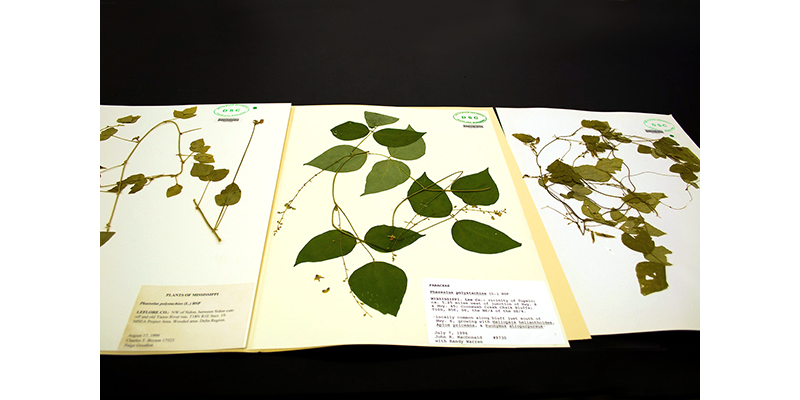 It’s a common saying that food brings people together, and one bean once linked an entire region of the United States.

Phaseolus polystachios, more commonly known as the Native American wild kidney bean, or thicket bean, is the only native bean species that was once widespread across the eastern United States, according to research by Ashley Egan, a research botanist and assistant curator at the U.S. National Herbarium, National Museum of Natural History, Smithsonian Institution. It is a member of the legume family and typically grows perennially. But despite its once widespread growth, Egan reported that few seed collections of Phaseolus polystachios are located in the U.S. National Plant Germplasm System.

Egan is studying the genes of the thicket bean in relation to crop improvement and is trying to collect as many samples of the bean as possible from across the county. She contacted Dr. Nina Baghai-Riding, professor of biology and environmental science at Delta State, about locations of the thicket bean in Mississippi —one of the native states of the Phaseolus polystachios.

Thanks to Delta State’s collection of five specimens, Egan will be able to more closely study the genes of the wild kidney bean.

“The Delta State University Herbarium has over 17,000 specimens,” Riding said. “More than 10,300 are documented in the database, which Dr. John Tiftickjian and I have worked on for the past 10 years.”

Delta State’s Herbarium, located in Caylor Hall room 242, contains specimens from 37 states, but its main focus is centered on plants in the Mississippi Delta. It houses four specimens classified as Phaseolus polystachios that were collected by Ronald Weiland, John MacDonald, Randy Warren, Charles Bryson, Paige Goodlett and Wanda Ingersoll. These specimens were collected in Hinds, Lee, Leflore and Grenada counties.

“The Delta State University herbarium is used extensively in teaching and research projects at DSU and around the local region as well,” Riding said. “The Department of Biological Sciences is excited for the Smithsonian to utilize the herbarium as well.”

“Teressa Oakes from NRCS also showed off the herbarium last summer during a workshop, and Dr. Tiftickjian plans to incorporate it into the Master Gardeners conference program in 2019,” Riding added.