THE YEAR OF CLEVELAND 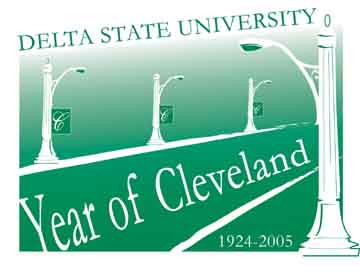 DSU Technology Fair
Wednesday July 12
Delta State University presents the 2006 Technology Show. This event is sponsored by BCI of Jackson in conjunction with the Office of Information Technology at Delta State. The 2006 Technology Show will feature four leading technology companies: Cisco, Sun, EMC and Polycom/Visicom. The show will be held in the State Room of the H.L. Nowell Union from 8:30 a.m. – 2:00 p.m.

Cleveland & Delta State: A History of the Town and Gown Relationship
This exhibit will be staged in the two side galleries of the museum in the Capps Building.  A brief history of the establishment of Delta State Teachers College in Cleveland and its evolution into the University of 2005 will be exhibited through manuscripts, visual arts and museum objects held by the University Archives.  Without the city of Cleveland, and its citizens, there would not have been a school, college or university; therefore, this exhibit also focuses on the close relationship that began in 1924 between DSU and Cleveland.

Oral History Interviews and Testimonials
The Archives plans to conduct interviews with people who attended DSU (either as college students or as part of the Hill Demonstration School) and remained in the community to make Cleveland their life-long home.  We hope to find personal stories that show what DSU and Cleveland have meant to each person individually.  Portions of these interviews will be incorporated into the Archives web pages as well as becoming permanent parts of the oral history collection.

Octoberfest
Friday, Oct. 14 – Saturday, Oct. 15
At Octoberfest, DSU will have a booth in recognition of the successful town/gown relationship with Cleveland.  It will include recruitment materials, photos with local merchants and children with the wooden statesman.  Okra recipe forms will be available for the community to submit their favorite okra recipes.  Children can stop by and play Ring Around the Okra to win DSU door prizes.

Fireworks Celebration
Saturday, Oct. 22
Dynamic.  Thrilling.  Awesome.  Spectacular.  An outstanding fireworks show will be held October 22 at the conclusion of the football game.  There will be a professional, custom-designed display of fireworks to commemorate DSU’s 80th Anniversary as the Year of Cleveland. More…

Born to Read
The children’s literature class and the Instructional Resources Center are co-joining to produce the Born to Read, a program for babies and toddlers up to age three.   Born to Read is armed with a mission to promote literacy, the love of language and to spotlight for parents and caregivers the value and necessity of singing, speaking and reading to babies.  The program, scheduled to run each Wednesday from October 5 – November 30, will be held at 10:00 a.m. in the Instructional Resources Center, located on the first floor of the Roberts-LaForge Library. More…

The Archives and Museum would like to partner with the History Department to help us all remember the veterans who serve our country, communities and towns.  Delta State had many students who pulled out of classes in order to serve during World War II and many of our permanent collections are from veterans.  We propose to display portions of the Archives and then on November 11, Veteran’s Day, have a short recognition ceremony in the Capps followed by light breakfast foods and coffee.  We propose that the ceremony begin at 7:30 a.m. to allow members of the Cleveland community and DSU community to attend without conflicting with work or classes.  We would like to have the confirmed support of some of our veterans and the clubs. More…

Music Event
This event will be a showcase of local talent to be held downtown Thursday night during the holiday season.

Children’s Literature Author
On November 14th the Delta Reading Council will be hosting the children’s literature author, Laurie Parker, to present readings from her books. It is open to the public.

Community Recognition Luncheon
November 10  12:00 p.m. – 1:30 p.m.
A community appreciation luncheon will be hosted by DSU during which special recognition will be given to selected individuals and organizations who have contributed significantly to the community.  More…

Tree for Downtown
A sunset red maple will be purchased and planted by Delta State University to commemorate the Year of Cleveland celebration.

Festival of Trees
Thursday, Dec. 1
Student groups from campus will decorate eight trees on the downtown walking trail, which will be lit for the first time immediately following Cleveland’s Christmas parade.

Cleveland Collects
Monday, Jan. 2 – Mid February
This is a second exhibition idea where the Archives will ask the community members to share their personal collections with DSU and Cleveland. The Archives has been sharing its collections for over eight years now, and we believe now is the time for Cleveland to show us their favorite collections. Each contributor will have access to a secure display case or two set up in the main Gallery of the museum. Then we will host an opening and invite the public to vote on their “Viewer’s Choice” of collections. The Viewer’s Choice can be announced through the newspaper, at a home basketball game, or at a second special evelnt held in the Archives building that same Spring semester.. More…

Essay Contest
The Delta State English department will sponsor an essay contest for high school students in grades 10-12. Students will be asked to submit pieces relating to Cleveland and their relationship with the community. The Division of Language and Literature will be responsible for guidelines, publicity, contact with the schools and permission from the superintendent.

The World’s Best Party
The Delta State College of Education is planning a special party with books and fun activities for the community’s elementary children. More details to follow.

Adults & Children in Organized Youth Sports: Who Wins, Who Loses?

Jacobs Conf. Center
Bob Bigelow, former NBA player, will be speaking at Delta State University in the Jacobs Conference Center (formerly the Delta Room) on the very timely subject of adult involvement in organized youth sports.  This event is a sponsored by the Cleveland Park Commission and Delta State University.  This talk is educational, challenging, motivational and humorous.

Gospel Music/Church Choirs
BPAC
An invitation will be extended to area church choirs to come and paritcipate in this event. each Choir will be allowed 15 minutes fro their performance.

Viking Cooking School
March 28  5:30 p.m-7:30 p.m.
We will invite a chef with the Viking Cooking School to do a demonstration in the Delta Room to showcase the new Ada Swindle Mitchell Viking Foods Laboratory. Also, our Quantity Foods and other Foods students prepare food to serve ahead of time. Tables will be in the Jacob Conference Center for around 100 people. Foods that would seem typical for the Delta would seem appropriate. This event will be known as a “Mocktail Party” mainly seving heavy hors d’oeuvers. Dependent upon the Chef’s wishes. Another reception is being considered the day or so after this event, open to the university and a wider audience, a tour of the facility will be allowed, and also a showcase of all FCS facilities on the first floor of Ewing.

The MS Walk
April 1
10 a.m.
Delta State University, through its Center for Community and Economic Development, and in cooperation with the National Multiple Sclerosis Society, is sponsoring the 2006 TEVA Neuroscience MS Walk.

young children ages 2-8 and engage them in follow-up fine arts activities.  Such activities

Delta Home and Garden Club Flower Show
April 6
Kent Wyatt Hall
Over 15 beautiful arrangements will be showcased on April 6 in Kent Wyatt Hall. Each arrangement will display the different disciplines and service areas of the univeristy.

artistry, insight, and innovation in all categories and genres.  We screen submissions

from established and emerging artists working in the United States and internationally.

We also show work made by students currently enrolled in college or university.