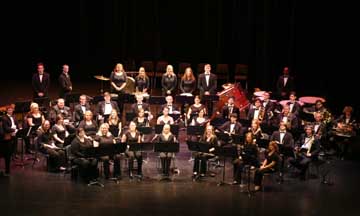 The Delta State University Wind Ensemble under the direction of Dr. John Wojcik will conduct its annual tour on March 2, 3, and 4.

On Tuesday, March 3, the Wind Ensemble will travel to Ripley High School for a morning concert followed by an afternoon performance at Northeast Mississippi Community College.

The Wind Ensemble will perform for the band students at Tupelo High School on Wednesday, March 4.

A tour concert for the Cleveland area will take place on Thursday, March 5 at 7:30 p.m. in the Delta and Pine Land Theatre of the Bologna Performing Arts Center.  This concert is free and open to the public.

The Wind Ensemble will open its tour performances with “Aubrey Fanfare”by Jack Stamp.  Second on the program will be “Enigma Variations”by Edward Elgar.  “‘Danny Deever’”the first of “Three Tragic Ballads”by Percy Grainger and “dished up for concert band” by Chalon Ragsdale, will follow.

Fourth on the program will be the beautiful and flowing “Allerseelen” (All Soul’s Day) by Richard Strauss, arranged by Albert Davis and edited by Frederick Fennell.  Next will be John Philip Sousa’s march, “The Glory of the Yankee Navy”as editedby Loras Schissel .  The concert will conclude with Clare Grundman’s transcription of Leonard Bernstein’s energetic and fun-filled “Slava.”