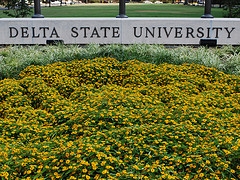 Welcome to the home page for the Affirmative Action and Equal Employment Opportunity for Delta State University. Human Resources is responsible for the implementation, monitoring, and evaluation of the University’s Affirmative Action Program and to ensure compliance with all federal regulations. Human Resources is responsible for investigating complaints of discrimination and serves as a liaison between the university and federal enforcement agencies concerned with equal opportunity and non-discrimination.

Equal opportunity in employment is governed by a variety of federal laws. The major applicable federal laws are Title VII of the Civil Rights Act of 1964, the Americans with Disabilities Act, Rehabilitation Act, Age Discrimination in Employment Act, Equal Pay Act, and Vietnam Era Veterans Readjustment Assistance Act (VEVRAA). These laws prohibit discrimination in all terms and conditions of employment – including hiring, compensation, training, promotion, and termination – based on race/ethnicity, color, national origin, sex, disability, veteran’s status, and age. The majority of these laws are enforced by the federal Equal Employment Opportunity Commission (EEOC).

In addition to those mentioned above, equal opportunity in higher education is also governed by Titles VI and IX.  Like their employment law counterparts, these laws collectively prohibit discrimination in educational programs or activities based on race, national origin, and sex. These laws are enforced by a division of the Department of Education known as the Office for Civil Rights (OCR).

1. What are my basic Civil Rights?

As an employee or student, you have the right to be treated equally regardless of :

2. What are “Protected Classes”?

In the employment recruitment process, members of the “Protected Classes” include

3. If I think my rights have been violated, who do I contact?