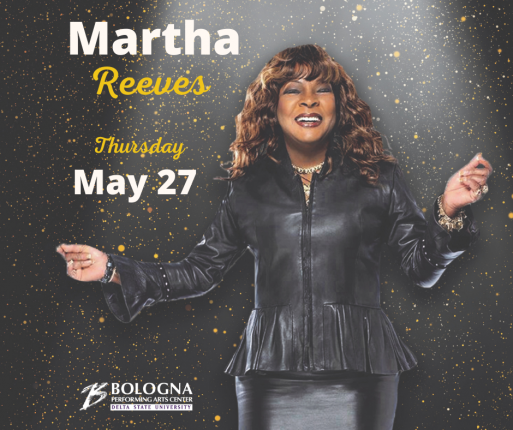 Martha Reeves Performs at the Bologna Performing Arts Center on May 27.

Martha Reeves will perform live in concert Thursday, May 27, 7:30 p.m. at the Bologna Performing Arts Center (BPAC) at Delta State University. Tickets are on sale at the BPAC Ticket Office, by phone 662-846-4626.

When looking for the perfect presentation of the Motown sound and style, few fit the bill as well as Martha Reeves & the Vandellas. It was 1963 when they moved from being Marvin Gaye’s original backup singers (“Stubborn Kind of Fellow,” “Pride & Joy,” “Hitch Hike”) to stars in their own right with the trifecta of “Come and Get These Memories,” “Heat Wave,” and “Quicksand.” Over the next decade, Martha Reeves & the Vandellas would be a consistent presence on the music charts, as well as on television and top venues across the US and abroad. With the unmistakable voice that helped define “the sound of young America,” Reeves reigns as one of music’s most beloved and acclaimed female singers.

As one reviewer recently exclaimed, “Martha Reeves is the ultimate Motown diva with soul flowing from the tips of her toes to the last hair on her head. They don’t make ‘em like that anymore.” Reeves and her Vandellas – her sisters, Lois (who joined the group in 1967) and Delphine (who came aboard in 1980) – remain in high demand, heating up clubs, casinos, concert stages, colleges and music festivals across the globe.

Their hits are a thing of legend: In addition to the aforementioned, they include the gospel-tinged “Nowhere to Run,” the classic soul favorite “My Baby Loves Me,” the pop anthem “Jimmy Mack,” and the signature, “Dancing In The Street.” While best known for up-tempo, hard driving tunes, Reeves’ shows are often highlighted by jazzy renderings of Billie Holiday’s “God Bless The Child,” her driving original blues “Watch Your Back” (both included in her self-produced CD “Home to You”), and the perennial showstopper, “Love Makes Me Do Foolish Things.”

Reeves is the recipient of the Dinah Washington Award, a Rhythm n’ Blues Foundation Pioneer Award, a Black Woman in Publishing Legends Award, and has been inducted in the Alabama, Soul, Rock and Roll, and Vocal Group halls of fame. “Dancing in the Street” has been entered into the Library of Congress Registry of Historical Recordings and into the Grammy Hall of Fame. Martha Reeves and the Vandellas, are listed among Rolling Stone magazine’s “100 Immortal Artists.”

Tickets to see Martha Reeves go on sale to the general public Monday, April 26 at www.bolognapac.com or at the BPAC Ticket Office at 662.846.4626. There concert is with 75% seating capacity at 7:30 p.m.  Masks to be worn at all times as required by Delta State University.