Open Casting Call on Jan. 11 on Campus for Extras and Speaking Roles for Horror Film

Attention film buffs and those with stars in their eyes—or gore in their hearts.

On Jan. 11, from 1 to 3 PM, in the Art Department’s main gallery on the Delta State University campus, there will be an open casting call for extras and speaking roles for the upcoming horror film, Son.

DSU’s Art Department is partnering with a production company from Memphis on this. DSU video majors will be serving as interns on the film, which will be shot in the region until the end of February, according to Michael Stanley, chair of the Art Department.

See the below for details. 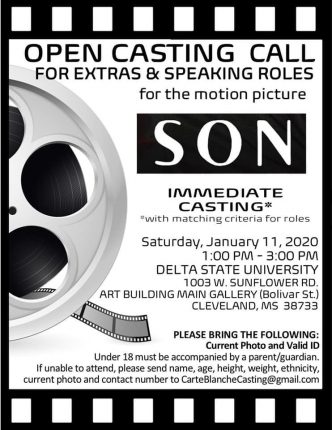