Senior music major Jordan Galtelli will present her senior capstone project on Thursday, April 4, 2019, at 1:40 PM in the Recital Hall of the Bologna Performing Arts Center. Her talk, “In Music Theatre: Origins to the Golden Age,” presented by the Delta State University Department of Music, is free and open to the public.

She will discuss the beginnings of music theater, some early influences, and how innovations in musical comedy between the 19th century and the first decades of the 20th century led to Rodgers and Hammerstein’s Oklahoma!

At Delta State, Galtelli has been involved in student government, has worked as a resident sssistant, and has served as an officer in the DSU Chorale. She has also been active in Greek life and is a member of Phi Mu. In addition to her extra-curricular activities, Galtelli is a high-achieving student-scholar and is a member of Omicron Delta Kappa, Pi Kappa Lambda, Phi Eta Sigma, and Phi Kappa Phi honor societies.

After her graduation in May, she will attend law school. 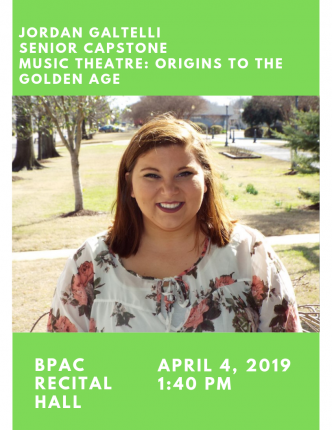