BPAC to Present Free Screening of “The Neutral Ground” April 25 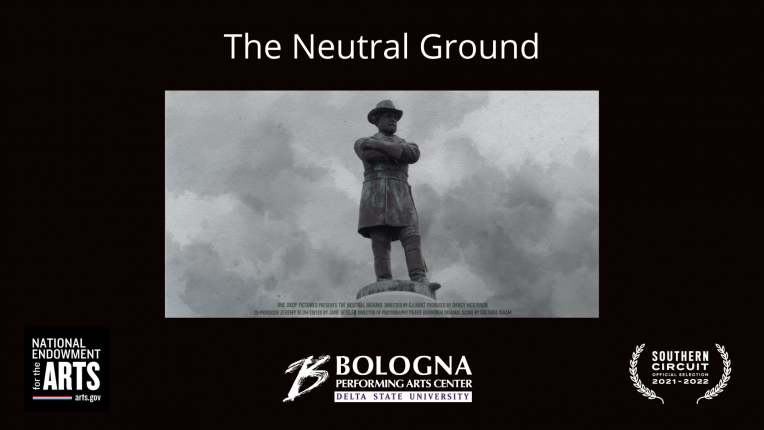 The Bologna Performing Arts Center (BPAC) is proud to present The Neutral Ground, at 6 p.m. Monday, April 25. Admission to the film is free.

The Neutral Ground documents New Orleans’ fight over monuments and America’s troubled romance with the Lost Cause. In 2015, director CJ Hunt was filming the New Orleans City Council’s vote to remove four confederate monuments. But when that removal is halted by death threats, CJ sets out to understand why a losing army from 1865 still holds so much power in America. Immediately following the film screening, Producer Darcy McKinnon will host a Q&A with audience members moderated by Dr. Donna Ossorio, Assistant Professor of Social Justice and Criminology at DSU.

Darcy McKinnon is a documentary filmmaker based in New Orleans. McKinnon’s work in documentaries includes the films Maquilapolis, Live, Nude, Girls, UNITE!, “Animals” and The Neutral Ground with CJ Hunt. With a back ground in education and arts organization leadership, she produces documentary work that focuses on the American South, and is currently in mid-production on Commuted with Nailah Jefferson, and Katie Mathews ’Roleplay, a hybrid play/documentary about student artist responses to campus sexual assault. She also co-directed a doc short, “A Fine Girl,” with support from If/Then. McKinnon’s work has been broadcast on POV, LPB and Cinemax, and her current projects have received support from SFFILM, CAAM, Chicken and Egg, Firelight Media, ITVS, Black Public Media, Sundance and Tribeca. Darcy is a co-founder of ALL Y’ALL, with Elaine McMillion Sheldon, an alum of the Impact Partners Producing Fellowship, and one of Filmmaker Magazine’s 2020 faces in independent film.

The last free screening that is part of the Southern Circuit Tour of Independent Filmmakers will be LILY TOPPLES THE WORLD on Thursday, May 19, 2022. LILY TOPPLES THE WORLD follows 20-year-old Lily Hevesh — the world’s greatest domino toppler and the only woman in her field — in a coming-of-age story of artistry, passion, and unlikely triumph.

All films will be screened at 6 p.m. followed by a Q&A with the filmmakers. Admission is free to all Southern Circuit films.

Visit  www.bolognapac.com for additional information about these and other performances, or contact the BPAC Ticket Office at (662) 846-4626.

Southern Circuit screenings are funded in part by a grant from South Arts, a regional arts organization, in partnership with the National Endowment for the Arts. For more information about Southern Circuit and South Arts please visit www.southarts.org/southerncircuit.