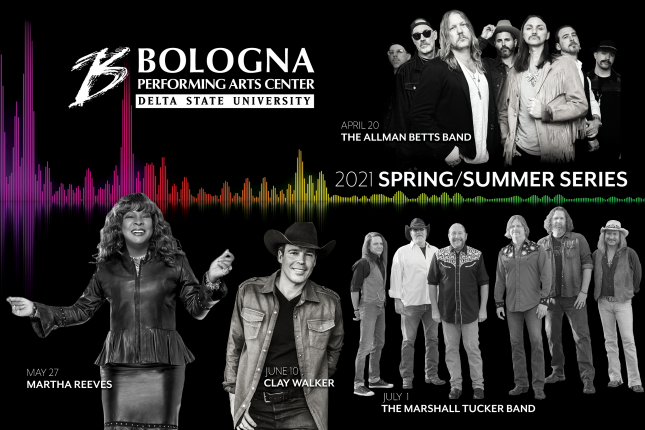 “We are so excited to welcome audience members back to the BPAC,” said Laura Howell, BPAC executive director. “We know things will look a little different during this Spring/Summer Series, and we appreciate everyone’s cooperation with making sure we reopen safely. We believe that the arts are essential, and we look forward to providing audiences with opportunities to experience live events.”

Patrons can expect temperature checks and are required to wear masks while inside the BPAC. Tickets will be sold in groups so that patrons are sitting directly next to people in their cluster. Finally, tickets will go on sale for each performance about 4-6 weeks before each event, which allows the BPAC Ticket Office to adjust seating charts and audience capacity to the most current health and safety operating guidelines.

The Spring/Summer Series begins on April 20 with THE ALLMAN BETTS BAND, which includes Devon Allman & Duane Betts on guitars and vocals, Berry Oakley Jr. on bass, Johnny Stachela on slide guitar, John Ginty on Hammond B3 (Robert Randolph/Dixie Chicks) and Devon Allman Project percussionists R. Scott Bryan (Sheryl Crow) and John Lum. The show features original music from their two recent albums, songs from their solo projects as well as classic songs by The Allman Brothers Band, the legendary group founded by Devon and Duane’s fathers, Gregg Allman & Dickey Betts. Originally scheduled to perform last spring, the band has agreed to give two performances in one night to allow for social distancing and 50% reduced audience capacity. The show is locally sponsored by The Cotton House, and tickets will go on sale to the public March 29.

On May 27, Grammy Award winner and Rock & Roll Hall of Famer MARTHA REEVES will take the stage. When looking for the perfect presentation of the Motown sound and style, few fit the bill as well as MARTHA REEVES and the Vandellas. It was 1963 when they moved from being Marvin Gaye’s original backup singers (“Stubborn Kind of Fellow,” “Pride & Joy,” “Hitch Hike”) to stars in their own right with the trifecta of “Come and Get These Memories,” “Heat Wave,” and “Quicksand.” Their hits are a thing of legend: In addition to the aforementioned, they include the gospel-tinged “Nowhere to Run,” the classic soul favorite “My Baby Loves Me,” the pop anthem “Jimmy Mack,” and the signature, “Dancing In The Street.” Tickets will go on sale to the public April 26.

Recording artist, songwriter, and entertainer with four platinum albums and a dozen No. 1 hits to his credit CLAY WALKER will perform on June 10. Can CLAY WALKER deliver? That’s the question, and he’s not afraid of it. In fact, he’s positioned himself to answer it squarely – one way or another – this year. With new creative and business teams and a deep well of hard-earned wisdom, WALKER relishes the challenge. “I’ve prepared myself for this moment in my career – mentally, physically and artistically,” he says. “I’ve never been more ready.” WALKER has been embracing the evolution of the genre and working with many of country music’s top songwriters. No slouch in that department himself, the native Texan has written or co-written many of his biggest hits including “Live Until I Die,” “Rumor Has It” and “I Can’t Sleep.” Tickets will go on sale to the public May 10.

The BPAC is also currently planning a full fall 2021 – spring 2022 season, to be announced later this summer. To learn more information about all of the performances visit www.bolognapac.com or contact the BPAC Ticket Office at 662-846-4626.