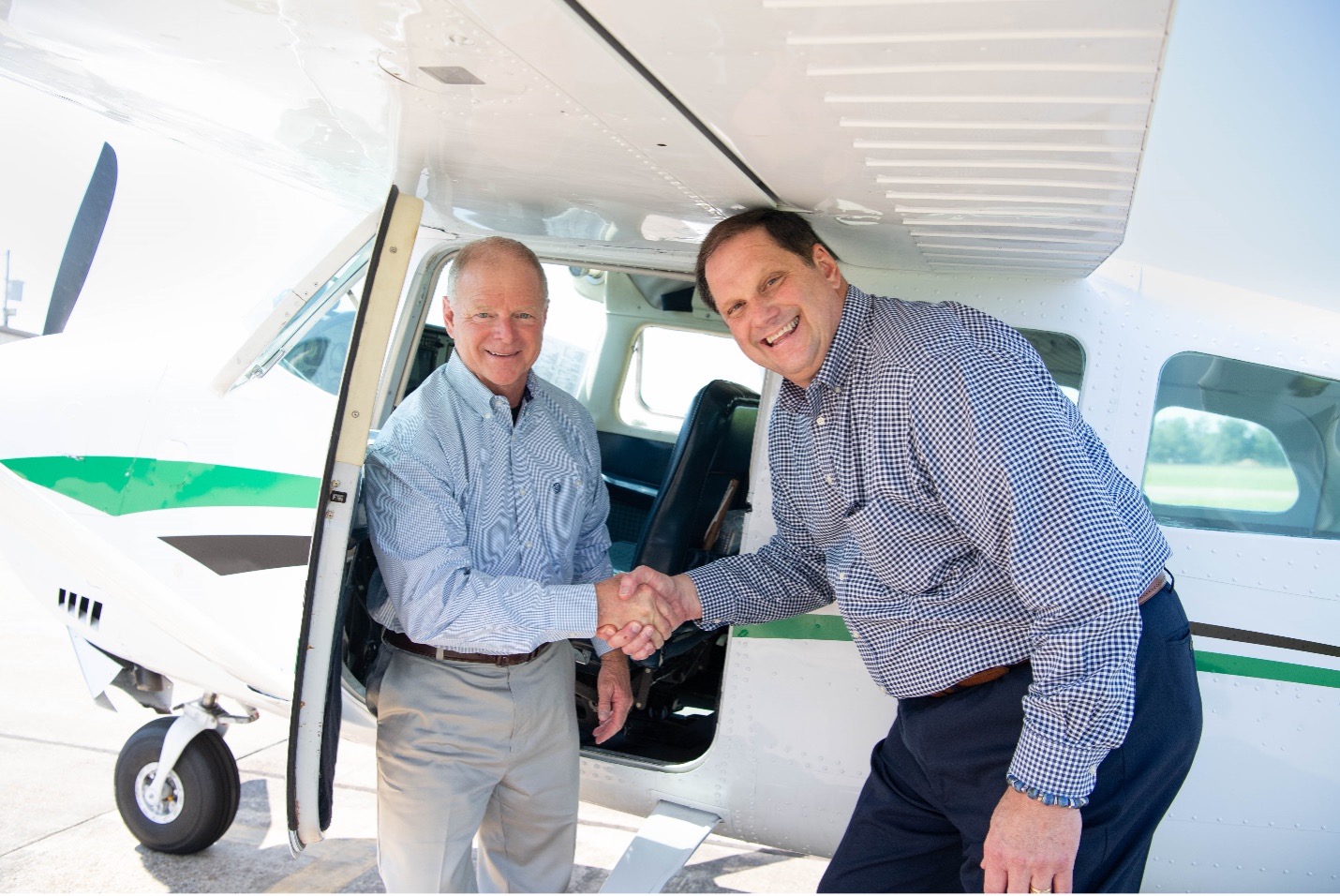 While managing a very successful insurance company, Caldwell maintains several leadership positions. He is a member of the Batesville Rotary Club and was Past President of the Batesville Chamber of Commerce. He currently serves on the Northwest Mississippi Community College Foundation Board, the Panola County Airport Board, and the Delta State University Commercial Aviation Advisory Board.

Caldwell graduated from the first commercial aviation class offered by Delta State in 1983. Through the years, he stayed in touch with professional pilot programs and noticed the cost to students was increasing.

This led to him realizing that he wanted to help students pursue their dreams through Delta State’s aviation program.

During the Summer 2022 Delta State Commercial Aviation Scholarship Push kickoff, Caldwell stepped up with anticipation to lead his fellow professional pilots in giving back and now urges other pilots to help.

“You can start your own scholarship at Delta State,” Caldwell says, “or make a gift of any size to help the commercial aviation students with their fees. Just find a way to help.”

Caldwell signed the scholarship agreement and presented the check for $10,000 to Chair Joe Saia in the Delta State University Flight Operations hangar at the Cleveland Regional Airport.

Caldwell stated that he “thoroughly enjoyed his tenure at DSU,” and that he “wanted to help somebody have the same opportunity he did.”

“I’m excited about having a graduate from our first graduating class of DSU’s Flight Operations program make the first donation toward our scholarship push,” said Saia. “‘Paying it Forward’ shows strong leadership practice from one of our early graduates and I know I’ll see this continue in future graduates. Supporting our current and future students, as Perrin Caldwell did, is the best way to take the commercial aviation program to its greatest potential.”

In addition to tuition, students have a number of instrument rating costs, as well as fees to cover plane rental for flight hours. These costs can add up quickly which prompted Saia to begin the scholarship push.

“I want these scholarships to offset fees for our students,” said Saia. “We have to support the profession with new graduates and the Delta State Commercial Aviation program can do just that.”

There is a national shortage of pilots in the United States and Delta State has a unique opportunity to help. Delta State’s Commercial Aviation degree is the only university approved by the Institutions of Higher Learning to offer a 4-year commercial aviation degree.

In the fall of 2022, more than 300 students were interested in enrolling into Delta State’s commercial aviation program. Becoming a professional pilot is a strong career choice with a possible six-figure salary after only a few years in the field.

Caldwell says, “There is such an opportunity in aviation right now, with the education and training people can get in Delta State’s program, they can walk right into a growing, exciting field.”

For more information about how to give a gift to the Delta State Commercial Aviation program, contact the Delta State University Foundation by email at foundation@deltastate.edu or by phone at 662-846-4794.