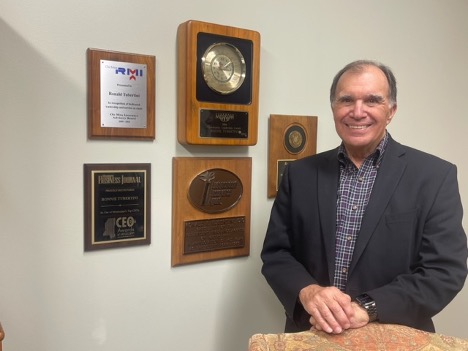 Mike Kinnison, Director of Athletics, and Richard Munroe, Vice President for Advancement and External Relations launched a vigorous athletic campaign supporting Delta State athletics to build an outstanding athletic program of excellence that aspires to be a premier competitor in the world of Division II sports.

The new athletic fund will support facility enhancements, new buildings, specialized athletic programming, student scholarships, and unrestricted dollars for the coaches and staff to use.

Tubertini made one of the first major gifts in the campaign and we are very thankful for his contribution. When asked about the reasoning behind his donation, Tubertini stated “I’m sure every Delta State alumnus wants to see our school’s athletic programs succeed and I’m no different.”

Tubertini proudly stated he presently works with three former DSU athletes every day in the SouthGroup Agency Offices and it is such a pleasure – “Ned Mitchell played football during Coach McCool’s tenure, Jimmy Newquist played baseball under Coach Ferris, and Brett Boykin played under Coach Kinnison”.

“I thought a gift to the foundation in support of the Athletic Campaign would be a great way to honor them for their athletic careers as Statesmen,” said Tubertini, “and help the athletic program move forward.”

Director of Athletics, Mike Kinnison, released a statement expressing his appreciation for the gift as well as his excitement to see the athletic department grow.

“The Delta State University Athletic Department would like to express a sincere “Thank You” to the Tubertinis for their gift to our Athletics Capital Campaign. We value their support and loyalty to the Statesmen and Lady Statesmen. It is through thoughtful gifts like this from our patrons who desire to see the Green and White be successful that allows us to do the extras and continue to move our teams toward competing on a national level.”

For more information about supporting the athletic campaign, contact the Delta State University Foundation by email at foundation@deltastate.edu or by phone at 662-846-4704.