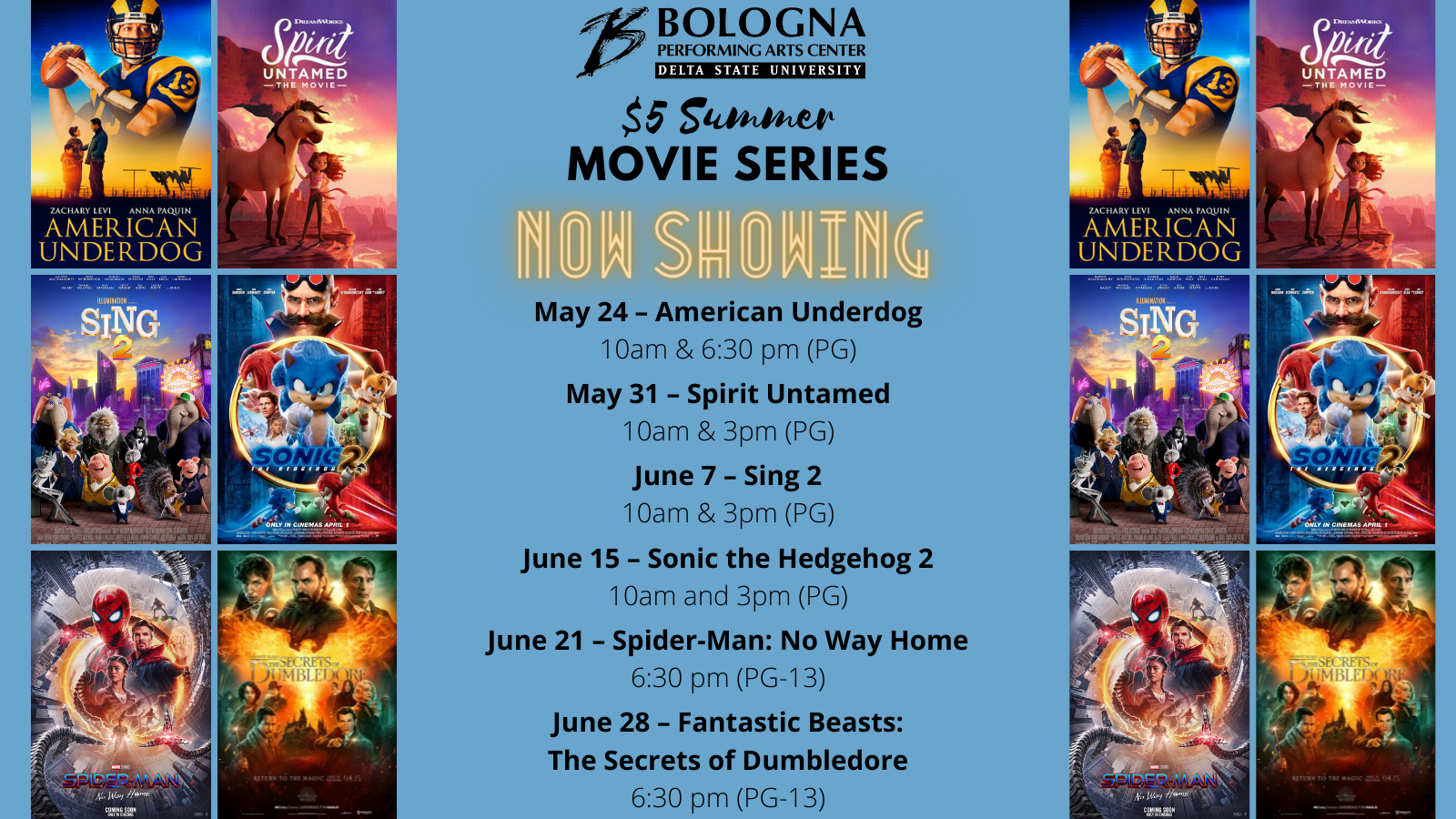 CLEVELAND, Miss.—Now in its 10th year, the Bologna Performing Arts Center (BPAC) at Delta State University plans to screen new releases of major motion pictures on its big screen in the Delta & Pine Land Theater. All tickets are $5 for general admission seating and are available at the BPAC Ticket Office, by phone at (662) 846-4626 or online at www.bolognapac.com.

All the films are rated PG or PG-13. Four of the films will be shown at 10:00 a.m., three at 3:00 p.m. and three will be shown in the evening at 6:30 p.m. Popcorn and candy concessions will be available for purchase to enhance the movie experience.

The series will begin on Tuesday, May 24, at 10:00 a.m. and 6:30 p.m. with the film American Underdog. The film is based on the inspirational, true story of Kurt Warner, who overcomes years of challenges and setbacks to become a two-time NFL MVP, Super Bowl champion, and Hall of Fame quarterback. Just when his dreams seem all but out of reach, it’s only with the support of his wife, Brenda, and the encouragement of his family, coaches and teammates that Warner perseveres and finds the strength to show the world the champion that he already is. Rated PG. Run time 1 hour 52 minutes.

Spirit Untamed, comes to the screen Tuesday, May 31, at 10:00 a.m. 3:00 p.m. After moving to a sleepy little town, young Lucky Prescott befriends a wild mustang named Spirit, who shares her rebellious spirit. When a heartless wrangler plans to capture Spirit and his herd, Lucky and her new friends embark on the adventure of a lifetime to rescue the horse that forever changed her life. Rated PG. Run time 1 hour 28 minutes.

Sing 2 will be shown on Tuesday, June 7 at 10:00 a.m. and 3:00 p.m. Can-do koala Buster Moon and his all-star cast of animal performers prepare to launch a dazzling stage extravaganza in the glittering entertainment capital of the world. There’s just one hitch — he has to find and persuade the world’s most reclusive rock star to join them. What begins as Buster’s dream of big-time success soon becomes an emotional reminder of the power of music to heal even the most broken heart. Rated PG. Run time 1 hour 50 minutes.

Sonic the Hedgehog 2 comes to the screen Wednesday, June 15 at 10:00 a.m. and 3:00 p.m. After settling in Green Hills, Sonic is eager to prove that he has what it takes to be a true hero. His test comes when Dr. Robotnik returns with a new partner, Knuckles, in search of a mystical emerald that has the power to destroy civilizations. Sonic teams up with his own sidekick, Tails, and together they embark on a globe-trotting journey to find the emerald before it falls into the wrong hands. Rated PG. Run time 2 hours 2 minutes.

Spider-Man: No Way Home will be shown Tuesday, June 21 at 6:30 p.m. With Spider-Man’s identity now revealed, our friendly neighborhood web-slinger is unmasked and no longer able to separate his normal life as Peter Parker from the high stakes of being a superhero. When Peter asks for help from Doctor Strange, the stakes become even more dangerous, forcing him to discover what it truly means to be Spider-Man. Rated PG-13. Run time 2 hours 28 minutes.The series will end Tuesday, June 28 at 6:30 p.m. with Fantastic Beasts: The Secrets of Dumbledore. Professor Albus Dumbledore knows the powerful, dark wizard Gellert Grindelwald is moving to seize control of the wizarding world. Unable to stop him alone, he entrusts magizoologist Newt Scamander to lead an intrepid team of wizards and witches. They soon encounter an array of old and new beasts as they clash with Grindelwald’s growing legion of followers. Rated PG-13. Run time 2 hours 23 minutes.

Tickets to see these movies are now on sale at www.bolognapac.com or at the BPAC Ticket Office at 662.846.4626.