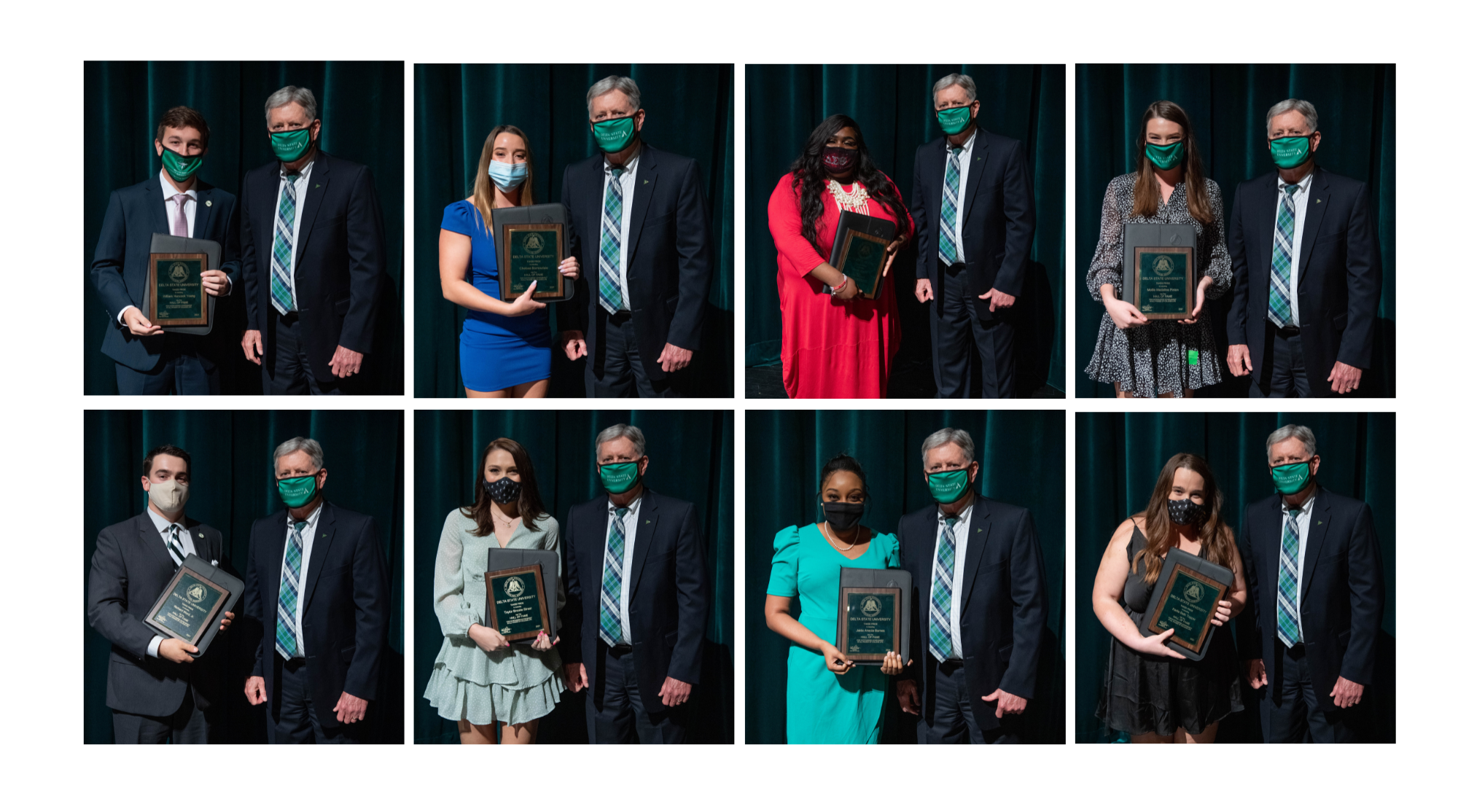 Since 1972, the DSU Hall of Fame has recognized outstanding students for accomplishments in all phases of college life.

Honorees were recognized during a special ceremony, hosted April 29 in the Bologna Performing Arts Center. The ceremony was highlighted by a keynote address from DSU alumna Dr. Tara Dunn Ross, who currently serves as the vice president for student affairs at LeMoyne-Owen College in Memphis.

2020 Hall of Fame recipients were also recognized during the ceremony with a special presentation from DSU 2020 SGA President Richard Word.

To be eligible for consideration for the Student Hall of Fame, students are required to be a full-time undergraduate student, classified as a senior who earned at least 45 hours at Delta State, maintain an overall grade point average (GPA) of 3.0 or higher, a show a demonstrated record of university service.

This year’s Hall of Fame nominees were selected by a point-system based on GPA, campus involvement/service, leadership roles and a short application with a brief essay. Finalists sat for a short interview with a five-person committee who made the final selection.

Will Young of Flora, Miss.—Since his freshman year, Young, a Pre-Med Biology major, has held many leadership roles at DSU as a member of the Student Senate as well as several progressive roles within the SGA, in which he currently serves as president. As an active member and president of Pi Kappa Alpha, one of his most impressive accomplishments includes raising $20,000 in five days to benefit a fellow DSU student in need. An avid volunteer both on and off campus, Young said Delta State has lived up to its promise, affording him the opportunity to “Join in. Stand Out.”

Maneia Sparks of Renova, Miss.—Earning more than 40 hours of community service each semester, Sparks has been devoted to serving both her campus and community while earning a degree in Social Justice and Criminology. As a member of DSU’s McNair Research Scholar’s Program, Sparks served as the only intern from the State of Mississippi as well as the only African American intern for St. Jude’s Children’s Research Hospital. After completing another internship for the Bolivar County Sheriff’s Department, Sparks was extended a job opportunity, becoming the department’s youngest employee. Sparks other leadership roles include serving as a president of the African American Student Council, SGA director of student organizations and vice president of the Kappa Pi Chapter of Delta Sigma Theta Sorority, Inc.

Mollie Pinion of Greenville, Miss.—Undergraduate years have been a busy time for English major Pinion, whose campus involvement includes attorney general for the SGA, member for the Social Justice Club and Student Senate, Writing Center tutor and copy editor/writer for “The Delta Statement.” As a member of the SGA, Pinion helped to organize a COVID-safe 2020 DSU Homecoming football game and court presentation. As she continues her education at law school, Pinion said the leadership and academic opportunities she received at Delta State has prepared her the next chapter.

Richard Word, Jr. of Greenville Miss.—According to Word, Delta State has played a key role in his personal development, providing him with ample opportunities to live out his personal philosophy of “do as much as you can.” As an Entertainment Industry Studies major, Word’s experiences range from volunteering at the local Head Start and animal shelter and representing his peers as a member of the 2019 and 2020 Homecoming Court to working with DSU alumnus Steve Azar and serving in leadership roles within Pi Kappa Alpha Fraternity. A past New Student Orientation leader and student lobbyist for the Fraternal Government Relations Coalition, Word also served as the 2020-2021 SGA president, an opportunity that provided him with invaluable experience.

Taylor Brooke Street of Greenville, Miss.—“Leadership, knowledge, friendship, opportunities and memories” are a few of the words that Street would use to sum up her time at Delta State. While pursuing bachelor’s degrees in both Business Administration and Marketing, Street has held leadership roles in Delta Delta Delta Sorority, the SGA, the Student Alumni Association, the National Panhellenic Council and is a past orientation leader and DSU Diamond Girl. In addition to reigning as Miss. DSU 2020-2021, Street has served as a volunteer community volunteer and has been inducted into the Omicorn Delta Kappa National Honor Society and Order of Omega Greek Honor Society.

Jaida Barnes of Silver Creek, Miss.—Growing up, Barnes was always taught to “leave something better than you found it,” which is what the Speech and Hearing Science major has strived to do during her tenure at DSU. As a student leader, Barnes has been involved in the National Student Speech-Language Hearing Association, Phi Kappa Phi Honor Society, Resident Hall Council, National Pan-Hellenic Council, and the Winning the Race Student Ambassadors. As a member of Alpha Kappa Alpha Sorority, Inc., Barnes has served as the program chairman, vice president and president, during which was responsible for initiating the chapter’s partnership with MSVotes and the DSU Social Justice Club for a Voters Registration Drive. As the co-chairman of undergraduate activities for the organization’s 89th South Eastern Regional Conference, Barnes helped to coordinate events for 900 sorority members during the first virtual regional conference.

Karlie Topper of New Albany, Miss.—In addition to holding several leadership roles with campus organizations, including the SGA student court, Delta Diplomats, Union Program Council, Student Alumni Association and the Panhellenic Council, Topper has managed to maintain a competitive GPA for a demanding major, Biology. A member of Phi Mu, Topper served as the philanthropy and social and has organized and volunteered in several community projects. She credits Delta State for molding her into a someone that her freshman self would be proud of.