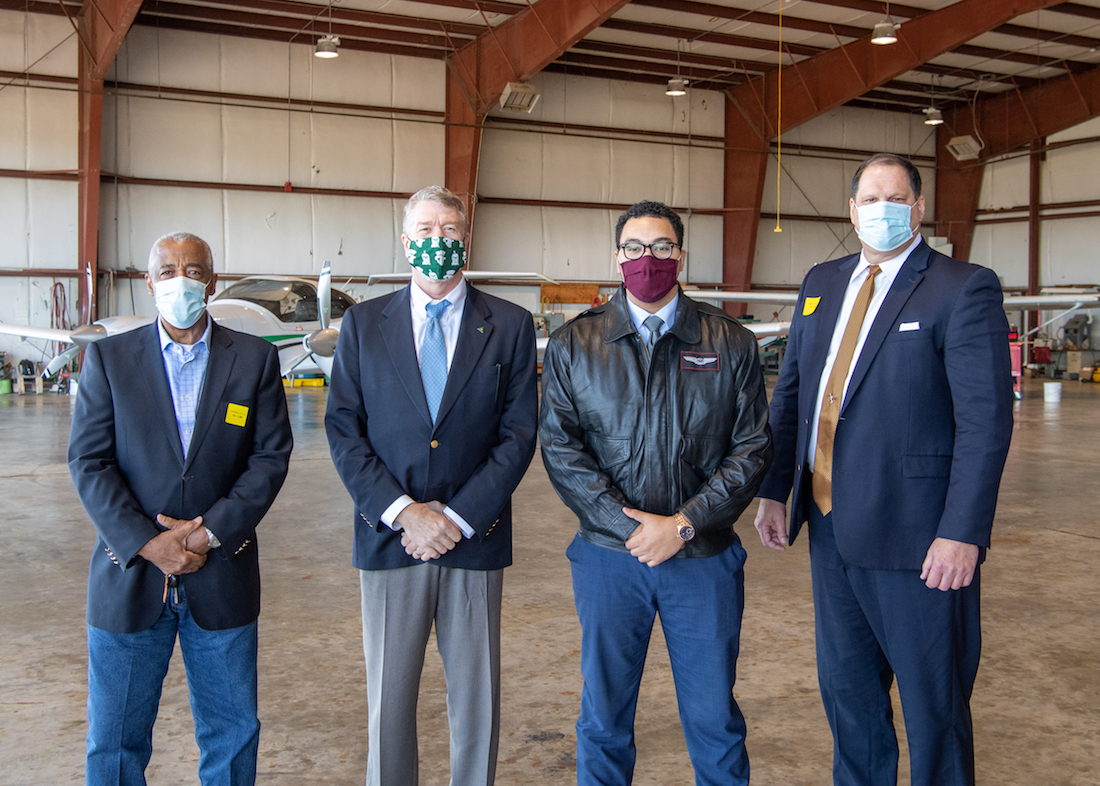 The Boeing 777, the world’s largest and most technologically advanced twin-engine jet, typically appeals to more seasoned pilots. However, Delta State University alumnus Malik Sinegal made history recently when he became the youngest African American Boeing 777 certified pilot in the world.

The 23-year-old Biloxi, Mississippi, native returned to his alma mater Monday morning to share details of his record-breaking achievement with the Delta State community.

The event was fittingly hosted at the DSU Flight Instruction Hanger, located at the Cleveland Municipal Airport, where Sinegal spent countless hours in flight training as he completed his bachelor’s degree in Commercial Aviation with an emphasis in Flight Operations.

“Congratulations to Malik—Delta State is very proud of this young man,” said President William N. LaForge as he welcomed those in attendance both virtually and in-person. “Malik’s extraordinary achievement is a terrific testimony to his drive, to his ambition, to his success already in his young career and certainly to his ability. It’s also a testament to Malik’s education at Delta State in one of our signature programs, and we’re very proud of that as well.” 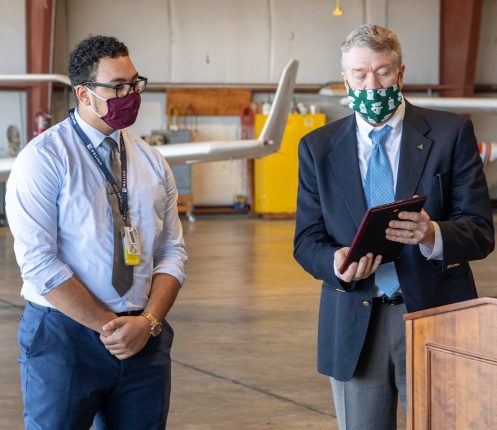 DSU’s Commercial Aviation program is a premier choice for students who desire a career as a professional pilot and is the state university system’s only undergraduate and graduate aviation programs.

The commercial aviation department, which attracts students from across the state, nation and world, offers three concentrations— Flight Operations, Aviation Management, and Logistics.

“Our commercial aviation students have quite a rigorous and challenging workload. They take anywhere from 18 to 21 academic hours each semester, and on top of that, they also have to be prepared for their flight lesson each day,” explained Joe Saia, interim director of Flight Operations.

Saia said Sinegal’s achievement is a significant credit to the program.

“The commercial aviation department, which started in the early ‘80s, has produced many successful pilots in the industry, and today marks one of our newest accomplished graduates, Mr. Malik Sinegal,” he said. “Achieving this at such a young age is a huge achievement. Malik has raised the bar for our future students.”

For Sinegal, his interest in aviation developed early on.

“My godmother was a flight attendant for Delta, and from the time I was about two-years-old, she would come down almost every weekend from Atlanta and pick me up and let me meet the pilots,” he shared.

In addition to its affordability, Delta State’s close proximity to home appealed to Sinegal. The 2019 DSU graduate said choosing Delta State was a great decision.

“The people in the aviation department are some of the most amazing people you’ll ever meet,” he said.

“Captain Flanigan was a top pilot at Delta Airlines for several years and never missed a day of work. After I met him, it was something I always wanted to do because the Boeing 777 was the largest airplane in Delta’s fleet at the time,” he said.

After completing the rigorous certification process which included Computer Based Trainings (CBTs) and simulators, Sinegal said he was exhausted but felt a sense of accomplishment.

“I was very proud that I could finally call myself a Boeing 777 pilot,” said Sinegal, who was initially unaware that he’d made history.

He hopes his achievement inspires other young pilots and sparks an interest in students who haven’t been exposed to the career.

“The impact I hope this will have, especially for young people, is to show them that there’s no age limit on success and that it’s never too early to start giving back,” he said. “Where I’m from, a lot of kids don’t think they can be a pilot…Some of them have never flown before. It’s all about going there, being present and letting them know that they can do it too.”