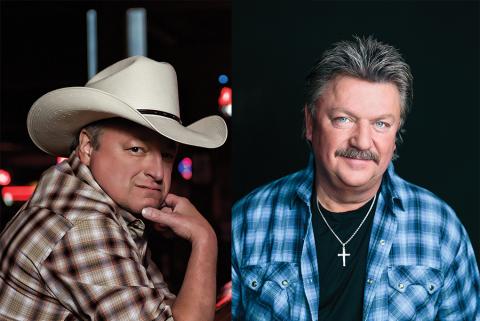 Veteran ’90s chart-toppers Mark Chesnutt and Joe Diffie are set to play their hits, and maybe even a few covers, in an intimate, acoustic style performance live in concert Thursday, March 5 at 7:30 PM at the Bologna Performing Arts Center (BPAC) at Delta State University. Tickets start at $40 and are on sale at the BPAC Ticket Office, by phone 662-846-4626, or online www.bolognapac.com.

Chesnutt is one of country’s true musical treasures. Critics have hailed him as a classic country singer of the first order and some of country music’s most elite entertainers, from George Jones to George Strait, echo this sentiment. Chesnutt’s stature is easily gauged; he has 14 No. 1 hits, 23 top 10 singles, four platinum albums, and five gold records. If you ask Chesnutt, he’ll tell you: It’s the music that has kept him around this long. In a world that sometimes confuses style with substance, Chesnutt possesses both: remaining true to himself as a traditional country artist while still keeping up with the ever-changing country landscape.

With chart-toppers like “Pickup Man,” “Third Rock from the Sun,” and “John Deere Green,” and 13 albums and more than 20 top 10 singles to his credit, Diffie has little to prove at this point in his career, yet he still has a fire in his belly to make good country music. A renowned songwriter in his own right, he has hits for artists like Tim McGraw, Conway Twitty, and Jo Dee Messina to his credit. Recently immortalized in the lyrics of Jason Aldean’s hit song “1994” and Chris Young’s “Raised on Country,” Diffie’s legacy is cemented in the annals of country music history. Diffie is a Grammy and ACM award-winner. He is a member of the Oklahoma Music Hall of Fame and has been a member of the Grand Ole Opry for more than 20 years.

Tickets to see Mark Chesnutt and Joe Diffie are on sale at www.bolognapac.com or at the BPAC Ticket Office.