By staffreportSeptember 29, 2019College of Arts and Sciences 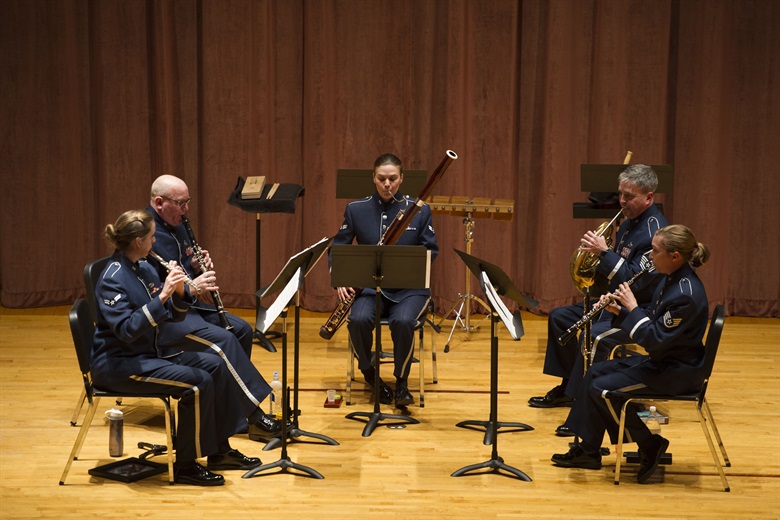 Spectrum Winds, a component of the United States Air Force Band of the West, will perform in the Recital Hall at the Bologna Performing Arts Center on Tuesday, Oct. 8, 2019, at 7:30  PM. The performance, presented by the Department of Music, is free and open to the public.

On Tuesday afternoon, the musicians will work with music students from the studios of Dr. Bret Pimentel and Dr. Shelley Collins in Zeigel Hall.

Spectrum Winds brings the highest standards of musical excellence to its audiences with a passion to honor past heroes, inspire the present generation, communicate the Air Force story, and recruit future generations of airmen. Comprised of four world-class musicians, Spectrum Winds explores the diverse world of chamber music for winds and percussion, exposing audiences to traditional literature, Latin, jazz, Celtic, and more.

The inherent versatility of Spectrum Winds enables it to draw on a long heritage of chamber music, from Mozart and Beethoven, moving forward to contemporary jazz and pop music, marches, and patriotic favorites. Capitalizing on this flexibility, Spectrum Winds provides entertainment at a multitude of venues: official military ceremonies and functions, educational outreach at elementary and junior high schools, recruiting concerts at high schools and college campuses, and outreach engagements in local communities.

Visit the Band of the West online at www.bandofthewest.af.mil or on Facebook at www.facebook.com/bandofthewest.