By May 3, 2019commencement, Press Releases 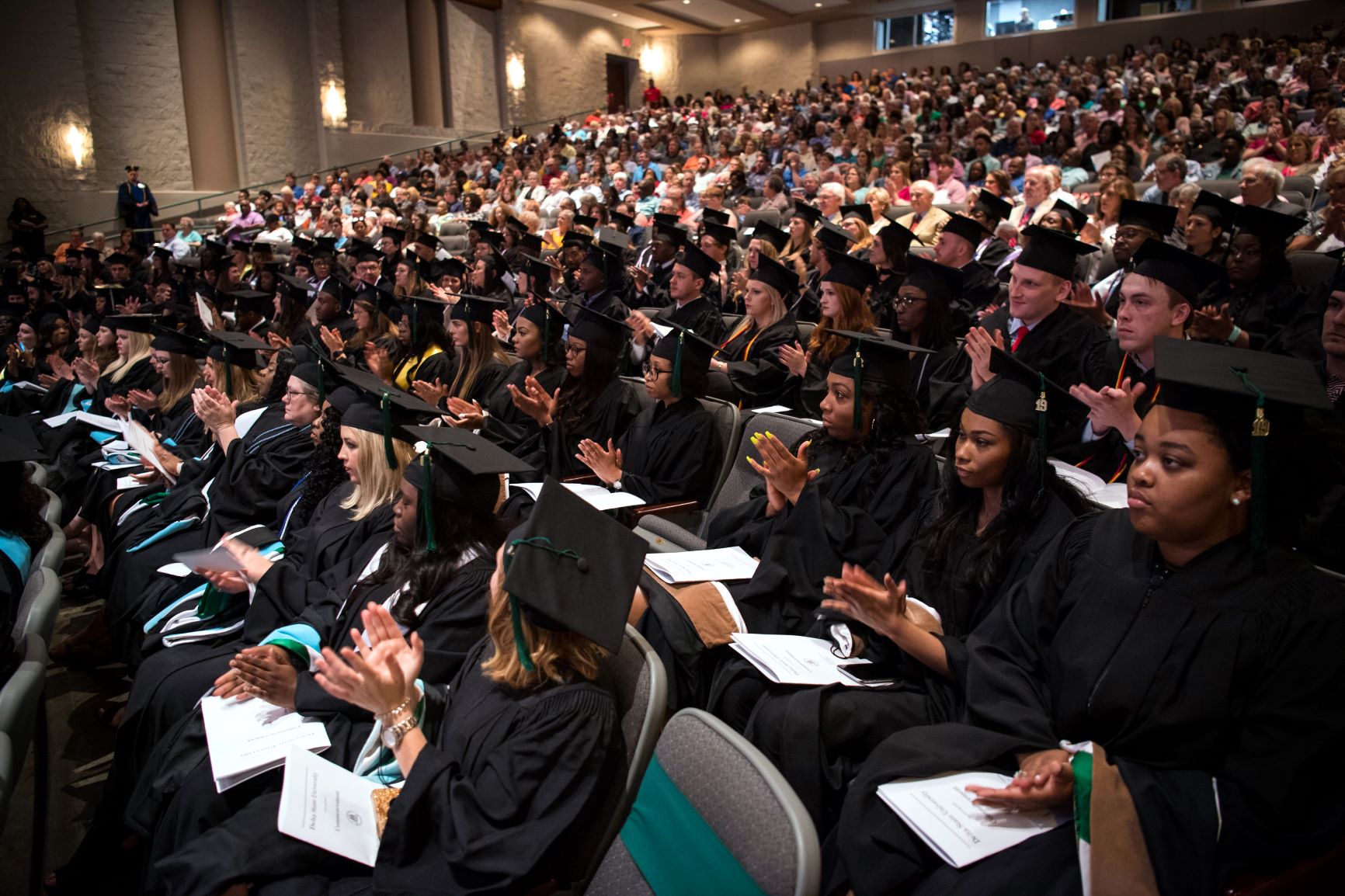 Delta State University spring 2019 graduates and family and friends pack the Bologna Performing Arts Center on campus on May 3, 2019.

“Today, graduates, you have reached a milestone, and we are very pleased to recognize your achievements,” declared Delta State President William N. LaForge, who led both the morning session, which honored undergraduates from the College of Business and Aviation and the Robert E. Smith School of Nursing and all DSU graduate students, and the afternoon event, which celebrated undergraduates from the College of Arts and Sciences and the College of Education and Human Sciences. “I urge you to view your college education as a trust that commits you to a lifetime of learning and service.” 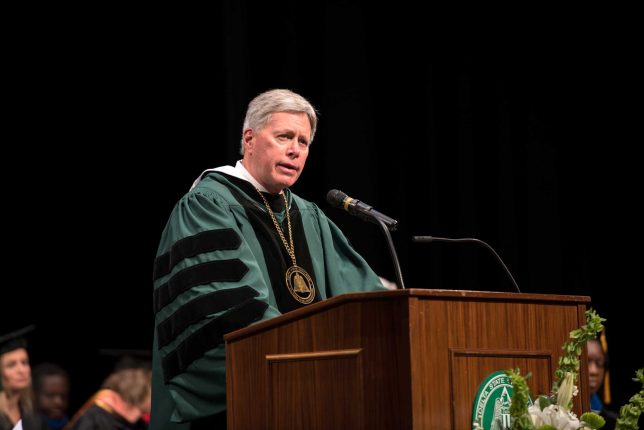 “Of course, this celebration does not belong only to you,” points out Delta State President William N. LaForge. “You have enjoyed the help of family and friends.”

Keynote speaker Josh West, a 2005 Delta State graduate (bachelor of arts) and CEO of Blue Delta, a premium bespoke jean company that he cofounded in 2011 and relocated to the hills of Mississippi, echoed those sentiments. “Find the best people and join them,” advised the Delta State Student Hall of Fame member, and “give of yourself for the benefit of others.”

Worry less about title, salary, and location of a job, continued West, who served as Student Government Association president at Delta State and who was inducted into Omicron Delta Kappa national leadership honor society, and focus more on work colleagues. And remember that accomplishments mean little without anyone to share them with, observed West, one of the top CEOs in Mississippi in 2019, according to the Mississippi Business Journal. 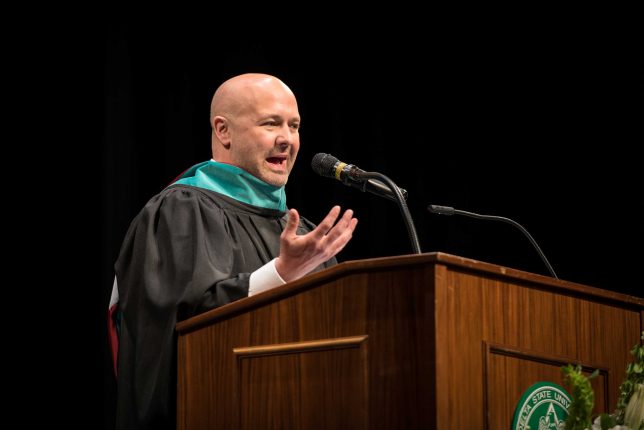 Keynote speaker and Delta State alumnus Josh West indicates that only 7 percent of the world’s population have a four-year degree, so “be thankful and proud.”

New bachelor’s degree graduates Thomas Coleman, of Yazoo City, and his married daughter, Lauren Coleman Aldridge, of Cleveland, also embodied these sentiments. She was unaware that he would join her in moving tassels to the left at the afternoon ceremony—until shortly before festivities began via a letter read backstage in a private moment.

“I thought: How cool would it be to graduate with her?” Thomas recalled after to a reporter. “You could drop her out of an airplane and she’d hit the ground running. Nothing fazes her.” Owner of a sandblasting and paint company, he graduated from Delta State as a university studies major through the Complete 2 Compete program that encourages Mississippi adults to return to school to finish their degree.

“I was completely surprised,” said Lauren, a speech and hearing science major and mother of a 2-year-old girl. “I tried not to cry because I didn’t want to mess up my makeup.” Spending just about all her waking moments as a student, parent, and spouse left little time to keep tabs on dear old dad’s coursework, she suggested.

“This is the best graduation gift” to give and get, said President LaForge before they took a photo with him and Provost and Vice President for Academic Affairs Charles McAdams.

Thomas Coleman’s son is scheduled to graduate as a biology/premed major from Mississippi College in December. Parents aren’t supposed to have favorite children. What will Coleman, who raised the kids on his own, do for his boy that’s on par with what he did for his girl? He’s thinking on it. 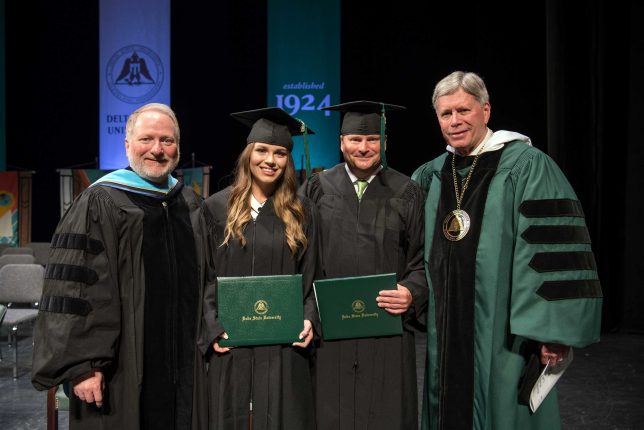 Dr. Corlis Snow, associate professor of teacher education and coordinator of graduate studies in elementary education and the master of arts in teaching program, received the 2019 S. E. Kossman Teaching Award, the highest distinction a faculty member may be accorded at Delta State. An 18-year veteran in the Division of Teacher Education, Leadership, and Research, she is the 37th recipient of the recognition. 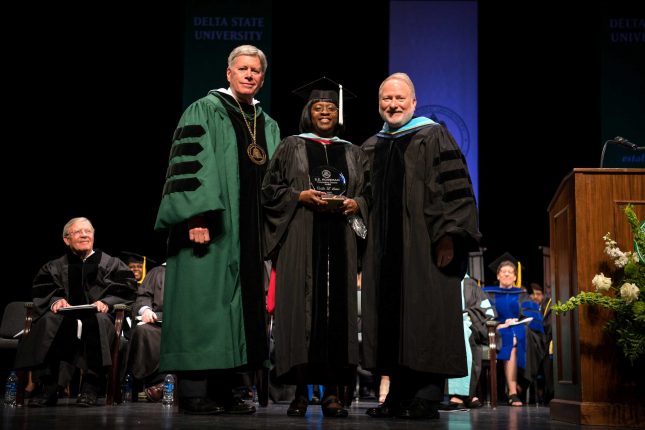 A Cleveland native, Cleveland High School graduate, and much-honored insurance executive, he received the DSU title of Distinguished Statesmen of the Year in 1993 and Outstanding Alumnus of the Year in 1998. Mitchell is a member of the Delta State University Foundation Board and served as president of the foundation from 1988 to 1990 and again from 1998 to 2002. Most recently, he co-chaired the Campaign for Delta State, which raised funds to help in the creation and enhancement of scholarships; to strengthen academic and athletic programs; to support initiatives of faculty, staff, and students; and to foster community and regional partnerships. Mitchell also has held numerous volunteer leadership roles in Cleveland and Bolivar County for many years.

A faithful attendee of just about every Delta State event, from sports to arts, he called the honorary doctorate “the nicest and most heart-warming” of all his accolades. 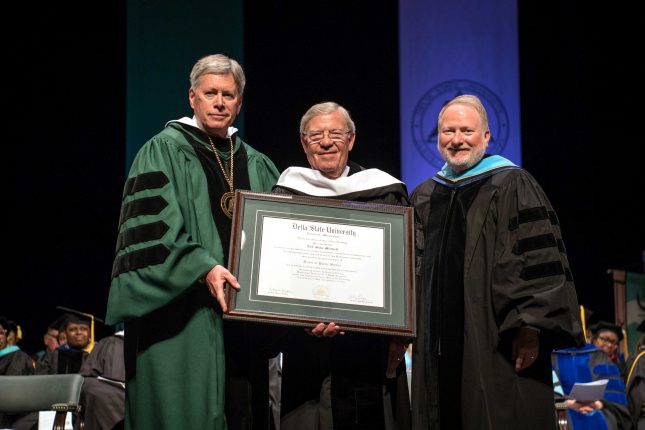 Subject to completion of all requirements as certified by the registrar, the 504 total degrees at the 92nd commencement broke down as follows:

The 149 graduate degrees: College of Education and Human Sciences, 87; College of Business and Aviation, 43; College of Arts and Sciences, 10; School of Nursing, 9.

Here are other photos from commencement: 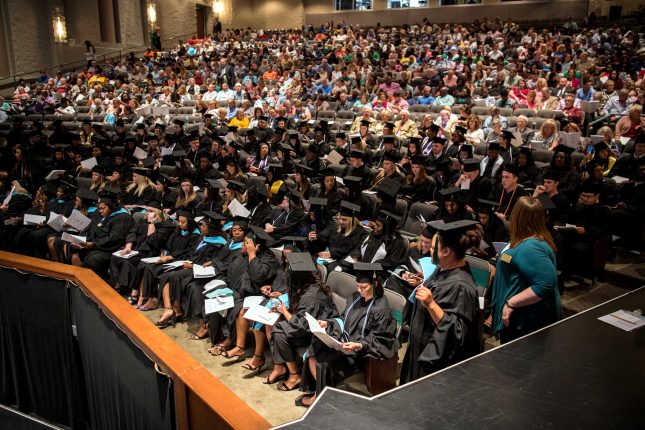 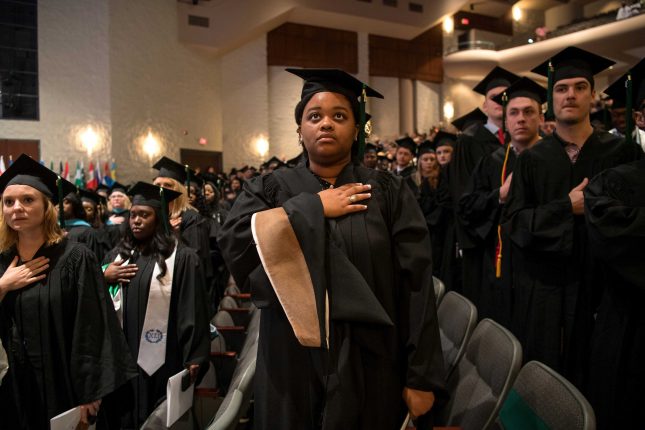 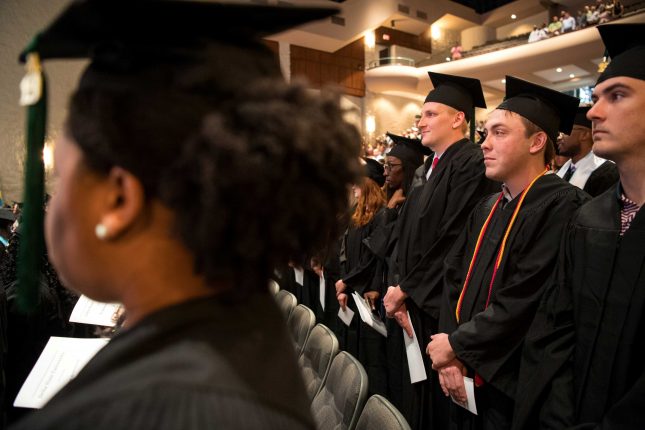 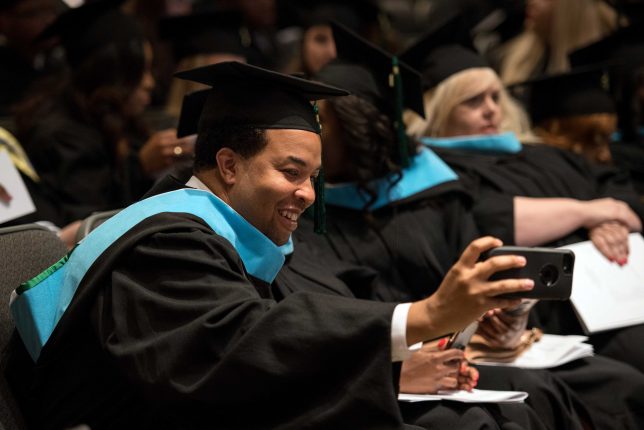 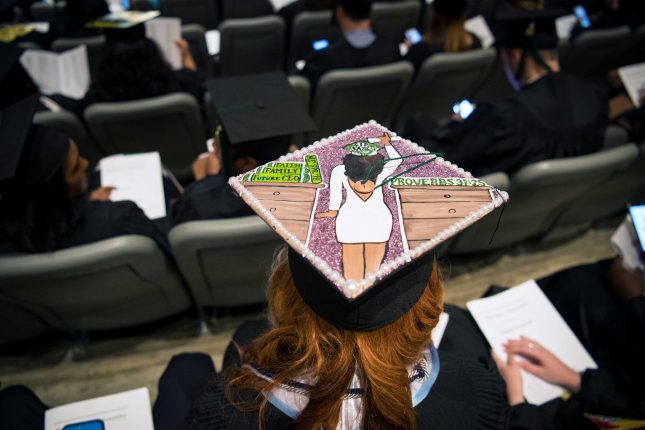 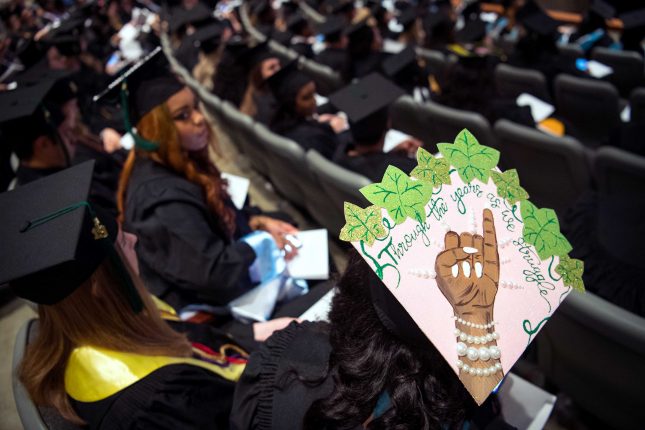 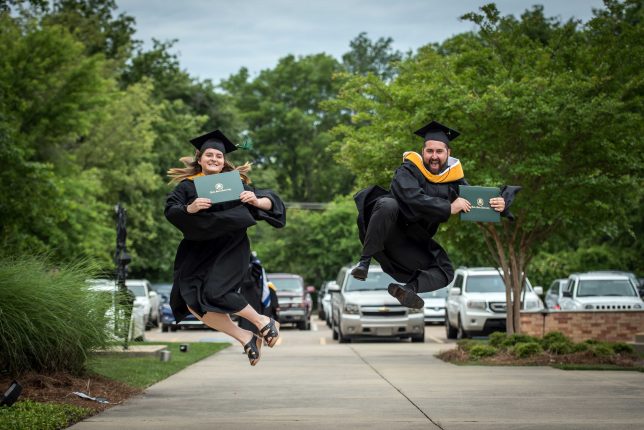 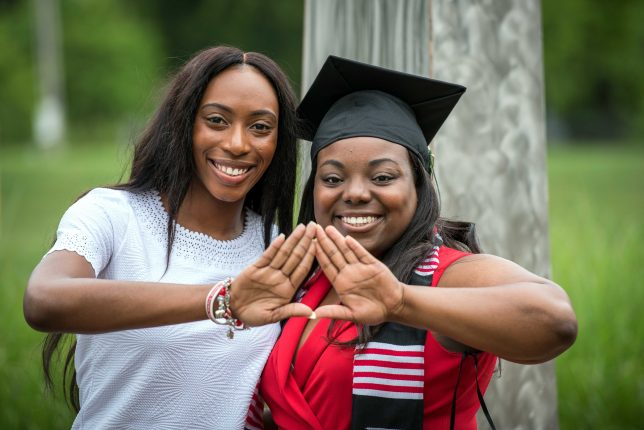