Faith Cox and Sean Gage, standout seniors at Lewisburg High School in Olive Branch, Miss., have been named the 2019 Statesman Scholars by Delta State University. The 12th-graders—and best friends—receive four-year “full ride” scholarships as a result and will enroll at Delta State in the fall.

“What originally attracted me to Delta State was its reputation,” said Cox, who scored a 31 on the ACT and whose unweighted GPA is 4.0. “Upon my visit, it was the warmth of the community.” Ultimately, she added, “What won me over was Delta State’s enthusiasm, interest, and willingness to invest in me as a student.” In fact, the importance of investing in others made such an impression on Cox, who performs much community service, that she intends to give back upon her arrival to Cleveland. “To show my appreciation for my university and my new home, I will focus on volunteer efforts aimed at improving the health and welfare of the residents of my new community.” 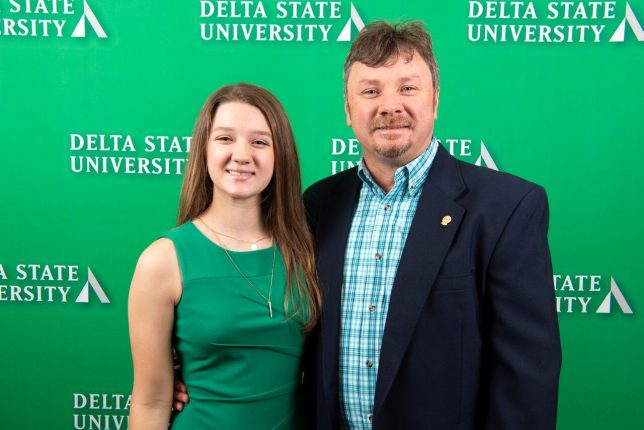 Faith Cox and her father, Jonathan Cox, pose during Statesman Scholarship Day in the student union at Delta State University on Feb. 8, 2019.

Gage, who has taken numerous honors, AP, and college preparatory classes, intends to pursue an aviation career. “Ever since I began looking into flight and the opportunities that a degree in aviation would open up to me, it took no time at all for Delta State to pop up on my radar,” he said. “DSU’s high-quality aviation program and its general affordability give me the opportunity to explore a career in aviation that would have previously been locked away.” He continued, “On top of that I, think the top-notch preparation I’ll receive at DSU will put me a leg up above the competition as I progress toward my ultimate goal of flying for FedEx.” 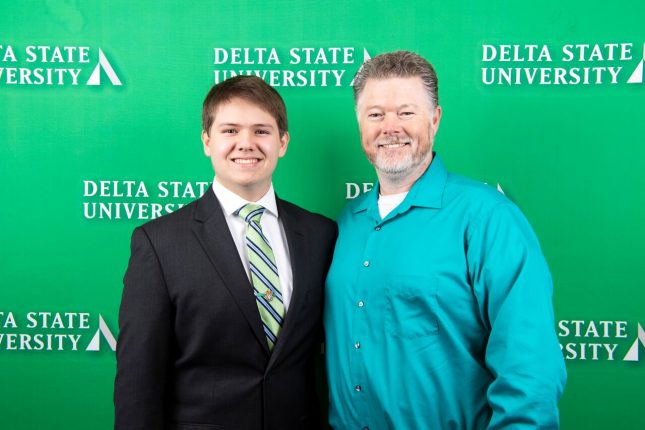 Sean Gage and his father, Douglas Gage, pose during Statesman Scholarship Day in the student union at Delta State University on Feb. 8, 2019.

The duo—who also are in their marching band, Cox as a drum major and French hornist and Gage as a percussionist—stood tallest among dozens of the best and brightest from high schools across Mississippi invited by Delta State to participate in a half-day contest on Feb. 8 to be selected as Statesman Scholars and receive the most prestigious scholarship bestowed by DSU. Applicants must have scored a 26 or higher on the ACT, accumulated a GPA of 3.5 or higher, demonstrated academic leadership, and performed notable service.

National Honor Society members and Student Council leaders, lettering athletes and star performers, volunteers who improve their community and scholars who hold part-time jobs while maintaining sparkling grades—these high-achieving seniors underwent two interviews at Statesman Scholarship day, one with a panel of judges from the Office of Academic Affairs, and another with representatives from the Office of Student Life. Cox and Gage received scholarships that cover tuition, room and board, and up to $300 for books for four years.

“We had a large number of exceptional students compete for the Statesman Scholarship,” said Rebekah Arant, enrollment manager at Delta State and Statesman Scholarship Day coordinator. “It was wonderfully tough for our judges to pick the cream of the crop because everyone was so impressive. We’re confident that Faith and Sean represent the caliber of students that the next generation of DSU leaders should aspire to.”

Realizing potential is another way of saying why Cox and Gage decided to enroll at Delta State.

“I am looking forward to becoming a more independent young adult in a warm community, surrounded by other young adults preparing to be the future leaders of our communities,” said Cox. “I also look forward to deepening my relationships with my old friends as well as making new ones by participating in Greek life as well as a number of clubs Delta State has to offer.”

Gage put it this way: “I am looking forward to the community and relationships that I can build for myself through Delta State,” he said. “Relationships are key, and the high quality, but personal, programs at DSU give you the ability to shine as an individual and attract influential people who can propel your career forward and give you new opportunities to better yourself and your craft.”