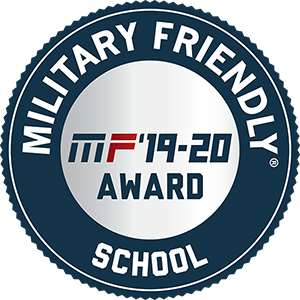 That made sense to junior business major William Alderman, who served four years in the Marines, achieving the rank of corporal, before enrolling at DSU. “It’s a welcoming environment, and we have a good VA representative,” said Alderman, whose stations included Japan, South Korea, Spain, and Djibouti as well as stateside in Jacksonville, N.C., and the southern U.S. border, and whose wife, Hailey, also attends DSU for her master’s in counseling.

Rankings for colleges and universities came from assessing public data (degree transfer, advancement, graduation and/or job placement) and proprietary data gathered from schools that participated in surveys conducted by the company.

Delta State met all the benchmark standards, including academic policies and compliance, admission and orientation, culture and commitment, financial aid and assistance, graduation and career as well as military student support and retention.

Charles A. McAdams, provost and vice president for academic affairs, said, “This distinction lets our military students know that we recognize this and we strive to provide the support they need to succeed at DSU and complete their degree.”

Sixty students with military backgrounds attended Delta State in fall 2018, as did more than 30 military spouses/dependents who received veterans’ benefits, according to Delta State’s Office of Institutional Research and Planning.

Yasmine Poe, a senior majoring in psychology and an active member of the 114th National Guard Military Police Company in Clinton, Miss., said she appreciates the university’s investing in resources for veterans, since some schools don’t.

“Besides the VA and accepting our military transcript, I know some universities don’t accept grants and loans and things of that nature,” Poe said.