By pszatmaryMarch 5, 2019College of Business, President 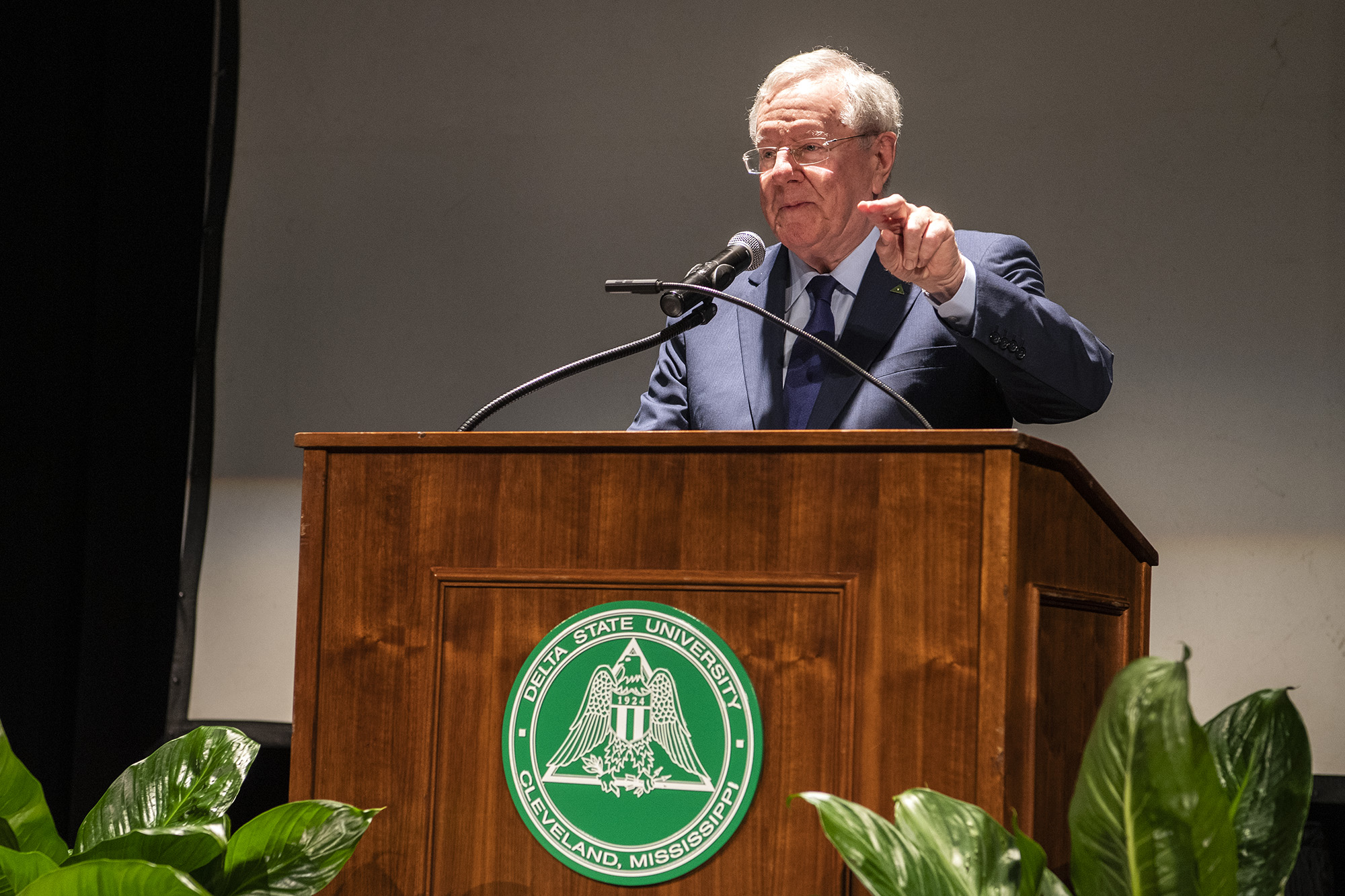 The business publishing magnate and two-time candidate for the Republican nomination for U.S. president (1996 and 2000) made that point in any number of ways during his evening talk in Jobe Hall auditorium on March 4. Coming at it from many different methods, he argued that the U.S. should return to the gold standard and abandon a floating currency because gold keeps its value better than anything else in history, Forbes said.

He based his lecture, “In Money We Trust? The American Dollar and Your Everyday Life,” on his related one-hour documentary, also called In Money We Trust?, that debuted on public television late last year and that he showed at the Delta State event. Both stemmed from his book, Money: How the Destruction of the Dollar Threatens the Global Economy—and What We Can Do About It (McGraw-Hill Professional, 2014), coauthored by Elizabeth Ames, who also wrote the documentary and attended the Delta State lecture.

“Money works best when it has stable value,” he explained in his opening remarks. When it doesn’t, Forbes continued, disaster looms. Look at 1920s Germany or Venezuela today, he cautioned. And the best way to stabilize money in the U.S. is to reestablish the gold standard, according to Forbes, who is chairman and editor-in-chief of Forbes Media, and whose portfolio includes Forbes, the nation’s leading business magazine, with a U.S. readership of 6.2 million and 38 editions worldwide, and Forbes.com, which amasses almost 60 million unique visitors a month. “When money is stable, we move ahead economically, socially, and culturally,” he added, ticking off many examples in the U.S. and worldwide over the centuries. 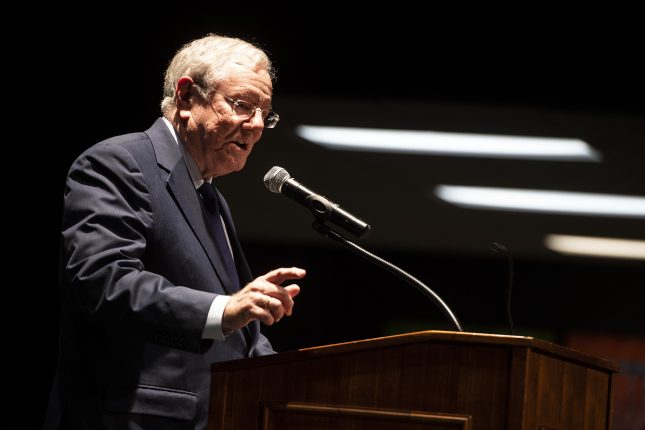 Forbes had many examples at the ready to reinforce his perspective on the economy.

The documentary reinforced Forbes’ stance and similarly presented an overview of the history of money throughout the world and in the U.S. in particular. It defined money as a stable medium of exchange with a mutually agreed upon value and as something that first gained currency as a means of trade and mobility. The film charted money’s role in world economies across the eras, summarized the importance the U.S. Federal Reserve Act of 1913 and the dissolving of the gold standard in the U.S. in 1971, touched on everything from devaluation to stagflation and from qualitative easing to “the 99 percent,” and discussed the ideas of economist John Maynard Keynes versus those of counterpart John Kenneth Galbraith.

“The whole purpose of the movie is to start a conversation,” Forbes said to Delta State attendees. “Where do we go from here?”

That’s what people wanted to know in the Q&A that followed. Delta State President William N. LaForge; Dean of the College of Business Billy Moore; sophomore business, finance, and accounting major and swim team member Allison Brownlee; and junior business major and tennis team player Mason Vice gathered onstage to ask Forbes questions about how to stabilize money, whether to eliminate capital gains, the effects of the current trade wars, and if the minimum wage should be raised, among other topics. Audience members then queried Forbes about the national debt, blockchain technology, and artificial intelligence, plus more. 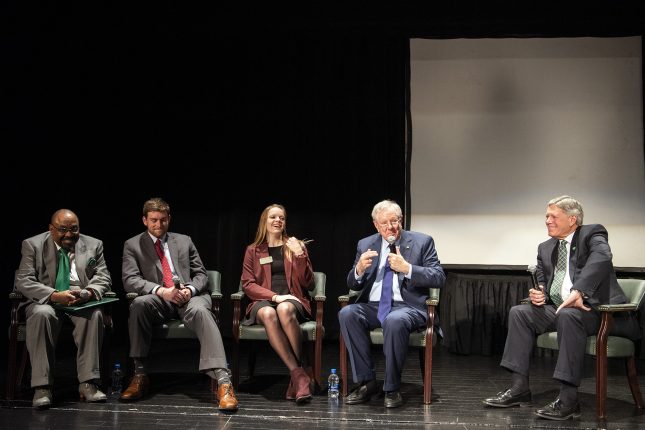 Throughout his appearance, sometimes Forbes was straightforward: “Even today we don’t get money right.” Sometimes he was provocative: “Tariff is another word for sales tax.” And sometimes he was humorous: to Forbes, trade wars make no sense because “mutually hurting each other leads to 50 shades of grey” whereas when products and services cross boarders, troops are less likely to do the same, he said.

And sometimes he was straightforward, provocative, and humorous at the same time. Forbes opposes governmental raising of the minimum wage. Instead, he believes the best way to deal with wage gap problems is “with prosperity.” To him, “artificially” boosting things ends up hurting the people who need the help the most. Forbes analogized what he considers the faulty logic of raising the minimum wage by decree: imagine combating the obesity epidemic by increasing the number of ounces in a pound from 16 to 32. “Overnight, people would lose half their nominal weight,” he observed.

After the talk, scores of people lined up to buy the prolific author’s Money book and have it autographed by him and Ames. And many others took selfies with him. A catered reception followed. 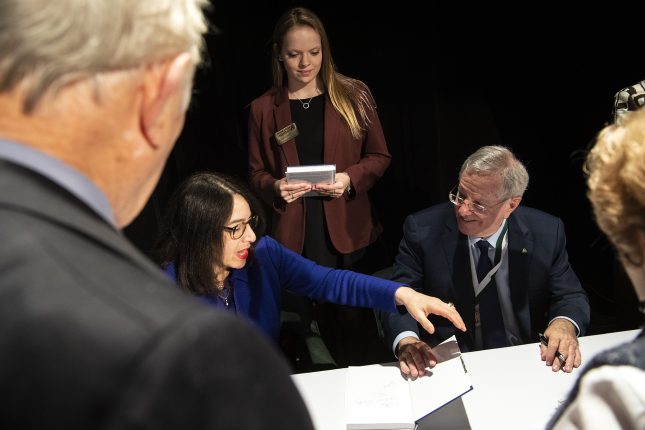 Forbes and coauthor Elizabeth Ames sign copies of their book, “Money: How the Destruction of the Dollar Threatens the Global Economy—and What We Can Do About It,” with Brownlee in the background. 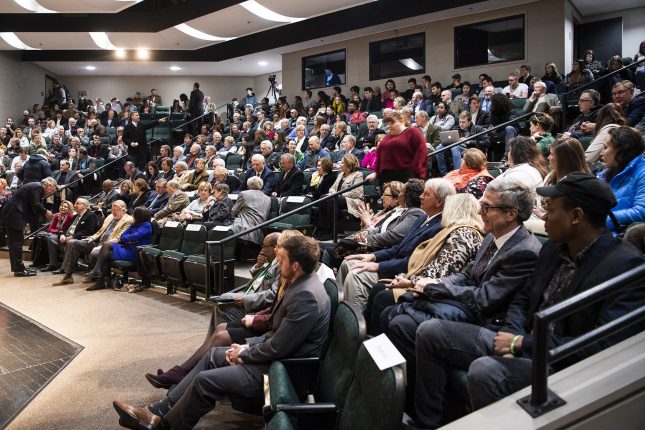 By the time the Forbes began his talk, just about every seat was taken in Jobe Hall auditorium. 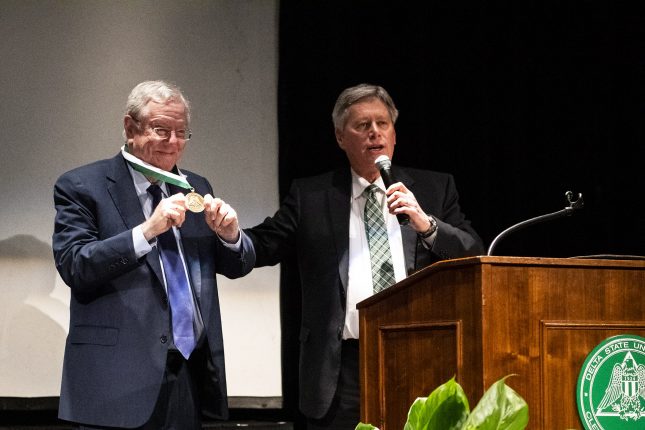 Forbes displays his Colloquia medal that LaForge hung around his neck.