Julian Rankin, Author of Book about Mississippi Delta’s Ed Scott, the First Nonwhite Owner and Operator of a Catfish Plant in the U.S., and Scott’s Daughter, Delta State University Alumna Willena Scott-White, to Speak on Campus on Feb. 6 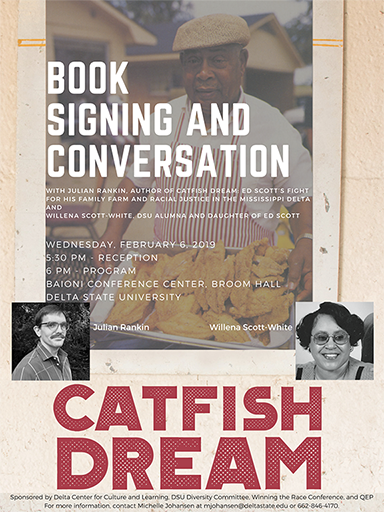 Julian Rankin, author of Catfish Dream: Ed Scott’s Fight for His Family Farm and Racial Justice in the Mississippi Delta, and Delta State University alumna Willena Scott-White, daughter of the book’s pioneering subject, will speak at Delta State on Wednesday, Feb. 6, 2019, at 6 PM in the Baioni Conference Center in Broom Hall. A welcome reception will take place prior at 5:30 PM. The events are free and open to the public.

Born and raised in the Mississippi Delta, Ed Scott Jr. (1922-2015) was the first nonwhite owner and operator of a catfish plant in the U.S. He expanded on the trailblazing efforts of his father, Edward Sr., a former sharecropper turned landowner and one of the first black men to grow rice commercially in Mississippi. The son farmed rice and soybeans and then focused on catfish on a large scale. The progeny “fed the black community both physically and symbolically. He provides an example for economic mobility and activism in a region of the country that is one of the nation’s poorest and has one of the most drastic disparities in education and opportunity, a situation especially true for the Delta’s vast African American population,” state press materials from University of Georgia Press, which published the book in 2018.

“Julian Rankin’s book and Ed Scott’s story are powerful reminders of both the persistence of institutional racism as well as the struggle over self-determination,” said Dr. Carrie Freshour, assistant professor of sociology and community development at Delta State. “I teach Ed Scott’s story to my students as a way to bring sociological concepts of inequality, racism, and globalization home to the Delta.”

Dr. Rolando Herts, director of the Delta Center for Culture and Learning at Delta State and executive director of the Mississippi Delta National Heritage Area (MDNHA), seconded the importance of the topic. “Delta State, the Delta Center, and MDNHA are committed to addressing longstanding social, economic, and cultural challenges in the Mississippi Delta through heritage education. The Scott family’s story speaks to the strength and persistence of African Americans in the Mississippi Delta, a group that has struggled most with these challenges historically. Providing a platform for their story to be told fulfills our heritage education commitment, particularly during Black History Month.”

Rankin is the executive director of the Walter Anderson Museum of Art in Ocean Springs, Miss. Raised in the Mississippi Delta and in Oxford, Miss., he earned a degree in English and creative writing from the University of North Carolina at Chapel Hill. Rankin received the Southern Foodways Alliance’s first annual residency at Rivendell Writers’ Colony in 2013 while working on Catfish Dream, which is his debut book.

Scott-White, historian for her family, graduated from Delta State in 1975 and spent 28 years as a teacher, supervisor, professional development trainer, and administrator in education before retiring to care for her parents. She was married to fellow Delta State graduate Joseph White Jr. (class of 1974) for 42 years until his death in 2014. A four-year letterman on the football and track teams, he represented the U.S. as a hurdler at the 1972 Olympics and was inducted into the Delta State Athletics Hall of Fame in 2012. They raised three children.

Scott-White and her father devoted much energy to regaining possession of his land that was foreclosed on and held in government inventory for 28 years. She considers this among her greatest accomplishments. She and her siblings established the Delta Farmers Museum and Cultural Learning Center to foster awareness about the legacy of farming in the Delta.

The appearance of Rankin and Scott-White is sponsored by Delta State’s Delta Center for Culture and Learning, Diversity Committee, Winning the Race Conference, and Quality Enhancement Plan.