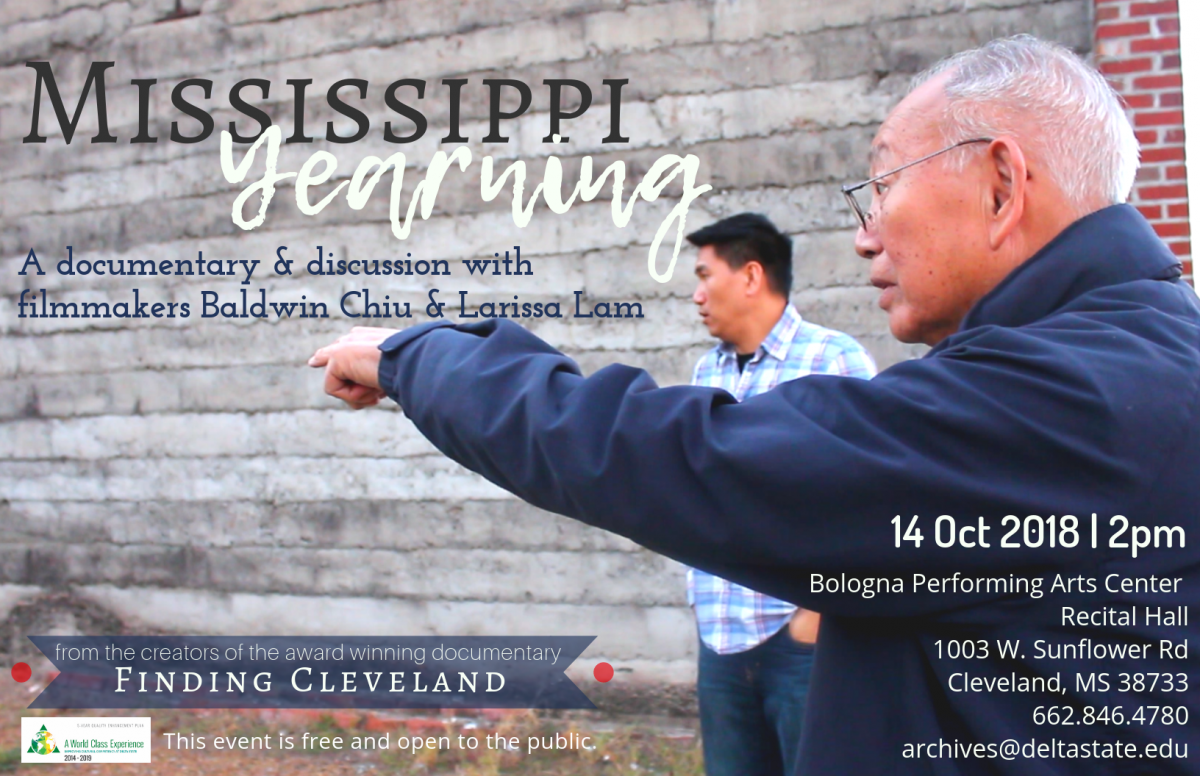 Filmmaking duo Baldwin Chiu and Larissa Lam will return to Delta State University to present the world premiere of their latest documentary about their Chinese immigrant family, Mississippi Yearning, an expansion of their 2014 effort, Finding Cleveland, at 2 PM on Sunday, Oct. 14 in the Bologna Performing Arts Center’s recital hall. This screening, which includes a Q&A with the filmmakers, is free and open to the public.

Mississippi Yearning reveals how one family’s journey to find their Chinese roots led them to the Mississippi Delta for a multiyear journey; the filmmakers reconnect past with present to explain the challenges of resurrecting a little-known family history and putting it into historical context. “Mississippi Yearning is an American story that reminds us how this country was made up of people from around the world even at its early stages,” said Chiu, “and how the contributions of the early Chinese in Mississippi subtly yet significantly influenced change in the history of the American South.”

The feature-length documentary builds on Chiu and Lam’s initial trip to the Delta, which they recounted in the 12-minute Finding Cleveland. Also world premiering at Delta State, it won several awards for its blend of family saga and American history. Left behind in China as a toddler, Charles Chiu, father of Baldwin Chiu, never knew his father or grandfather; both would pass away in the Mississippi Delta trying to establish a business that would earn them enough money to bring the rest of the family to America. Filmmaker Chiu shares that the desire of his father, who would emigrate as a young man, to reconnect with his past “leads to surprising encounters and the revelation of a disturbing act in American history.”

Dr. Robert Voss, Professor of American history at Northwest Missouri State University, said of Finding Cleveland, “This is an overlooked piece of the complex racial history of the United States. Finding Cleveland reveals stories of immigration, identity, and race, ultimately answering the difficult question: ‘Who are we?’”

Mississippi Yearning continues the story through recently discovered family correspondence and a greater understanding of the conditions many Chinese faced in the early 1900s. The film provides a platform to discuss the nation’s first blatant attempt to deny citizenship to immigrants, the 1882 Chinese Exclusion Act, which would burden the Asian population of America well past its repeal following World War II. The Mississippi Humanities Council partnered with the filmmakers on the new documentary because of the educational enrichment opportunities within it.

The free screening is sponsored by the University Archives & Museum and Delta State’s Quality Enhancement Plan. This film was made possible by a grant from the Mississippi Humanities Council, through support from the National Endowment for the Humanities. Any views, findings, conclusions, or recommendations expressed in this film do not necessarily represent those of the National Endowment for the Humanities or the Mississippi Humanities Council.

About Delta State University: Delta State University is a four-year public institution whose more than 3,750 students come from most U.S. states and more than 50 countries. The university offers numerous unique programs, including the Delta Music Institute entertainment industry program, and is the only university in Mississippi to offer undergraduate and graduate aviation programs. Situated in the heart of the Mississippi Delta, which is recognized as the birthplace of American music, Delta State has become the center of music and culture for the state and the region. The university is also the academic center for the blues, offering an online blues studies curriculum that leads to a certificate for advanced study of blues music. In addition, Delta State offers top-notch academic programs in business, arts, sciences, nursing, and education, among other areas.