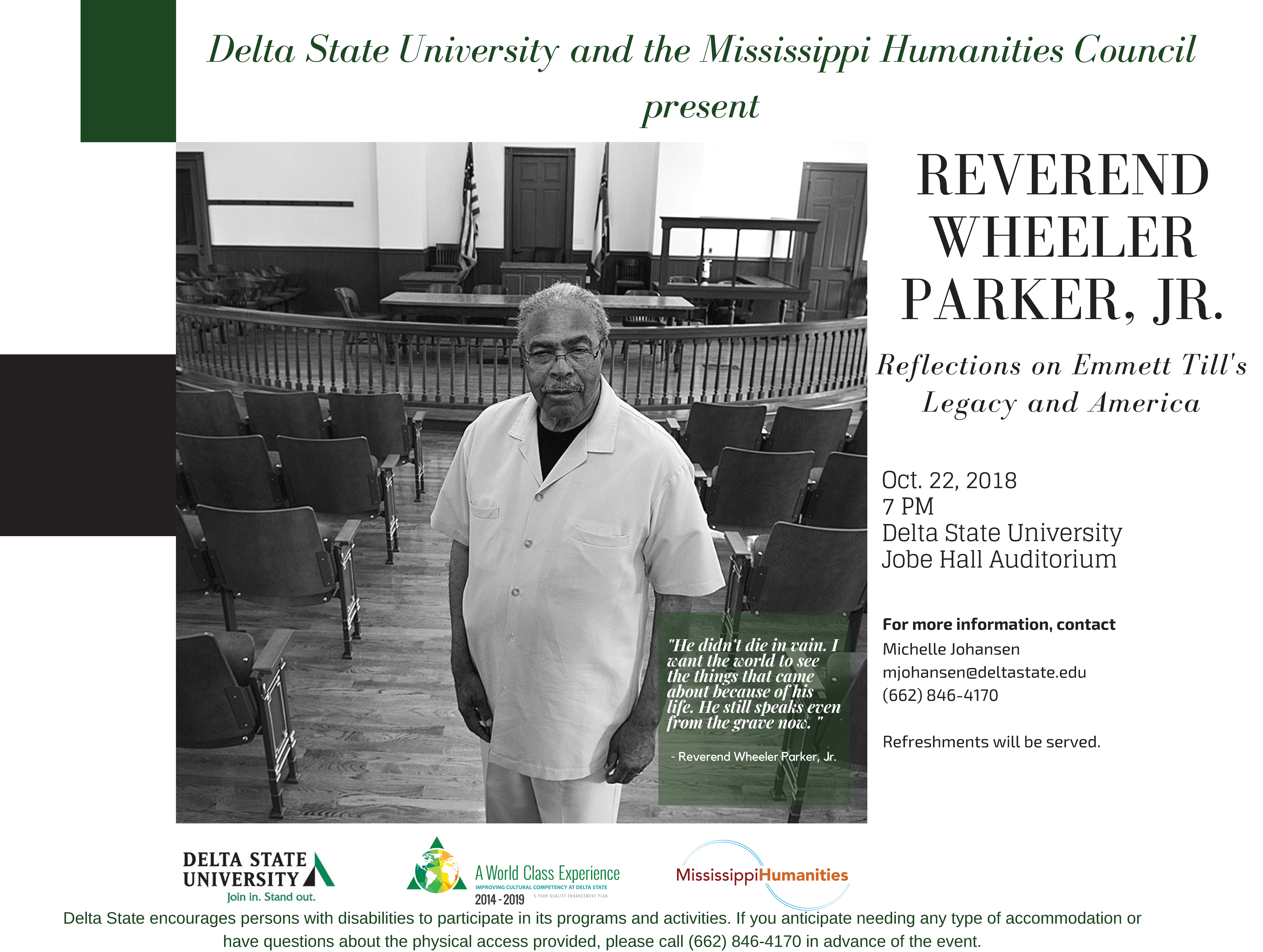 Rev. Wheeler Parker Jr. will speak about his cousin, Emmett Till, on Monday, Oct. 22 at 7 PM in Jobe Hall on the campus of Delta State University. The event is free and open to the public.

“Rev. Parker is the last living witness to the kidnapping of Till, the 14-year-old African-American from Chicago who was abducted and lynched in Mississippi in 1955 after being accused of flirting with a young white woman,” said Michelle Johansen, Delta State’s Quality Enhancement Plan coordinator. “The horrific crime and subsequent acquittal by an all-white, all-male jury of the two men charged with his murder shocked the nation and catapulted the civil rights movement. The event still resonates today. In fact, this past summer, the FBI began investigating the case again. So Rev. Parker’s visit to Delta State is all the more timely.”

Born in Schlater, Mississippi, and reared in Chicago, Parker traveled with Till by train to the Mississippi Delta to visit relatives in August 1955. Parker, 16, and Till went to Bryant Grocery and Meat Market in Money, Mississippi, to purchase candy. Till allegedly whistled at Carolyn Bryant at the store. Four days later, Till was abducted at gunpoint from his great-uncle Moses Wright’s home, with Parker present. Till’s body was found in the Tallahatchie River soon after. An all-white, all-male jury acquitted Roy Bryant, wife of Carolyn, and his half-brother, J. W. Milam, of the murder charges that September.

“We must never forget Emmett Till. Since 1955, so many people have kept alive his story. They have been historians, documentary filmmakers, activists, investigative journalists, museum curators, teachers, students, and many more. But no one has been more important in remembering the life and story of Emmett Till than his family,” said Dr. Chuck Westmoreland, associate professor of U.S. history at Delta State. “Mamie Till-Mobley made sure that the nation did not forget her boy, the joy of his life, and the tragedy of his death. Since her passing, Rev. Wheeler Parker has been a powerful voice for the Till family.”

“Every parent and child in Cleveland/Bolivar County should attend this event,” said Dr. Rolando Herts, director of The Delta Center for Culture and Learning at Delta State. “For several years, The Delta Center’s Most Southern Place on Earth workshop for K-12 educators has hosted Emmett Till’s relatives, Wheeler Parker and the late Simeon Wright, at Tallahatchie County Courthouse where the Till murder trial was held. This is one of our highest-rated workshop sessions, because hearing directly from historic figures in the places where that history happened is powerful and transformative.”

Northeast Mississippi Community College collaborates on the event and will host Rev. Parker on Oct. 23. Delta State’s traveling exhibit about Till will be displayed at both sites during the visits. His appearances are made possible with funding from the Mississippi Humanities Council, the National Endowment for the Humanities and Delta State’s Quality Enhancement Plan.

About Delta State University: Delta State University is a four-year public institution whose more than 3,750 students come from most U.S. states and more than 50 countries. The university offers numerous unique programs, including the Delta Music Institute entertainment industry program, and is the only university in Mississippi to offer undergraduate and graduate aviation programs. Situated in the heart of the Mississippi Delta, which is recognized as the birthplace of American music, Delta State has become the center of music and culture for the state and the region. The university is also the academic center for the blues, offering an online blues studies curriculum that leads to a certificate for advanced study of blues music. In addition, Delta State offers top-notch academic programs in business, arts, sciences, nursing, and education, among other areas