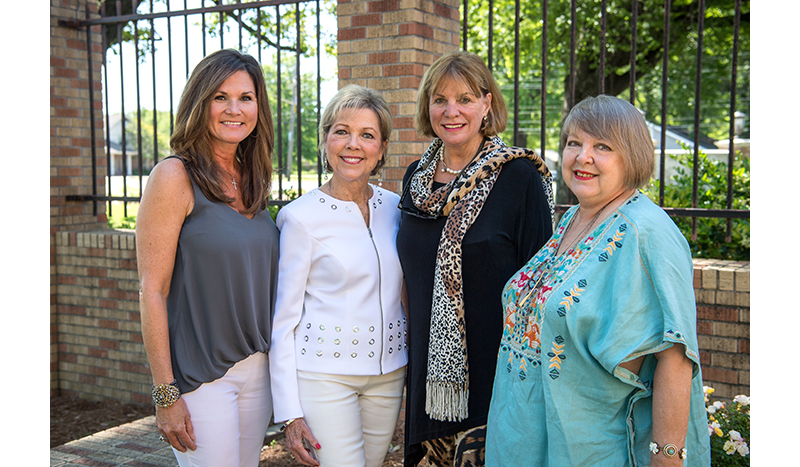 A group of fashionable alumni and former staff at Delta State University gathered for a special reunion during 2018 Go Green Weekend festivities on April 28.

Barbara Black Travis, founder and creator of the Delta Models program at Delta State in 1976, hosted a number of former student models and program directors at the Hugh Ellis Walker Alumni House to reminisce on their modeling days at the institution.

Travis, a Greenville native, began teaching fashion merchandising and marketing course at Delta State in 1976. Shortly after arriving, she was tasked with brainstorming ideas to increase departmental enrollment.

“I told them, I have an idea that’s different, but I think it will work,” said Travis, who had previously taught at Mississippi University for Women and had experience working in Mississippi’s fashion malls.

“At the time, a lot of Mississippi schools had modeling teams, but I wanted to create a team that also included men,” said Travis. “And that’s where the idea for Delta Models came from. I specifically wanted to incorporate male athletes because they’re coordinated and I can teach them moves. And, I knew they loved the limelight.”

Delta Models took off with popularity, partly due to the one credit students received for participating.

During class, Travis would teach them fashion show production, modeling and other elements of performing. Performances would start on campus, and with her contacts with local malls, she helped plan fashion shows at the malls featuring DSU models.

Quickly, Delta Models became sought after for bookings across the region.

“Another thing that really helped us was our publicity efforts,” said Travis. “I sent a story idea about Delta Models to the Commercial Appeal in Memphis, and they ended up making us the cover story of their Sunday magazine section.”

After the Commercial Appeal feature, the media attention poured in. The story was picked up by the Associated Press, Los Angeles Times, NBC’s Today Show, Seventeen Magazine, Mississippi Magazine and more.

“It was great publicity for Delta State, it was a great opportunity for the students,” added Travis. “The bookings just kept coming in, and the enrollment went up, which was a big plus.”

Travis would go on to lead the group until the beginning of 1980 when she was hired to take over the Metrocenter Mall in Jackson. And the program continued with popularity into the ’90s.

“I’ve kept in touch with the students over the years, and it’s great to see some of them here today,” said Travis. “It’s always great to bump into them across the state too, because we were always like a big family. I’m thrilled the program lasted for so long after I left Delta State.”

Travis said the best thing about Delta Models is that it made the students feel special.

“It gave them self-confidence and they blossomed,” she said. “They took the basic things they learned about development and leadership and applied them in their lives. I still see those qualities when I bump into them now.

“Everything I taught dealt with appearance, presentation and interactions with other people, along with self-confidence on stage and speaking ability. All of these things are exactly what you need to succeed in a career. I think everything they learned helped them personally and professionally.”