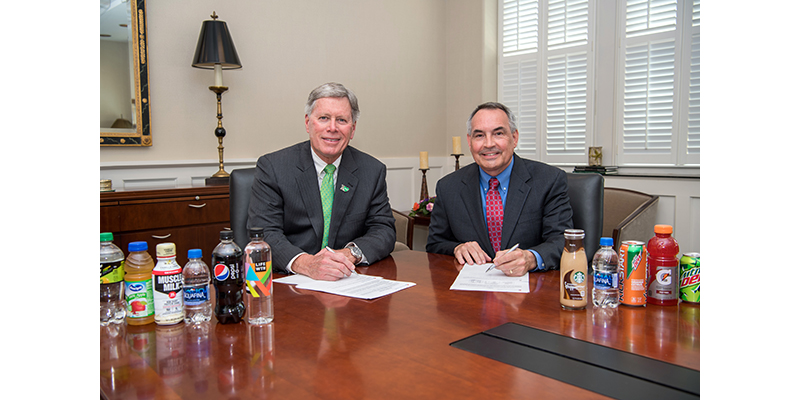 Delta State University President William N. LaForge welcomed representatives from PepsiCo on April 12 to sign the beverage services contract with the company. In February, Delta State announced PepsiCo as its new beverage vendor of choice for the next five years.

LaForge said he was looking forward to the numerous opportunities the new partnership will provide.

“PepsiCo will provide a large array of services and benefits, including an extensive line of beverages that students prefer, a significant increase of revenue from commissions, a special partnership with Gatorade for our athletic programs, card reader machines campus-wide for convenience of purchase, and a number of student engagement events and promotional programs on campus for the next several years,” said LaForge. “On top of those important features of the relationship, PepsiCo will also purchase substantial advertising from the university.”

Sales reports have already shown a major increase in consumer purchases, with sales tripling in the first month. PepsiCo has remained busy restocking machines throughout campus on a daily basis.

“A lot of students are excited about having a wider variety of options that aren’t just sodas, such as the iced coffees and flavored water,” said Griffin. “It’s also been a bonus to have access to more healthy options. Students also like using their Okra Kards, credit cards and debit cards at all the machines.”

“Now, there’s something everyone can find, even for the people not big on sodas,” said Gorman. “Additionally, now it’s much more convenient to find a drink on campus with the new drink machines and the card readers. Probably one of the biggest things I’ve heard from the other students is how much they like having Starbucks coffee in the drink machines.”