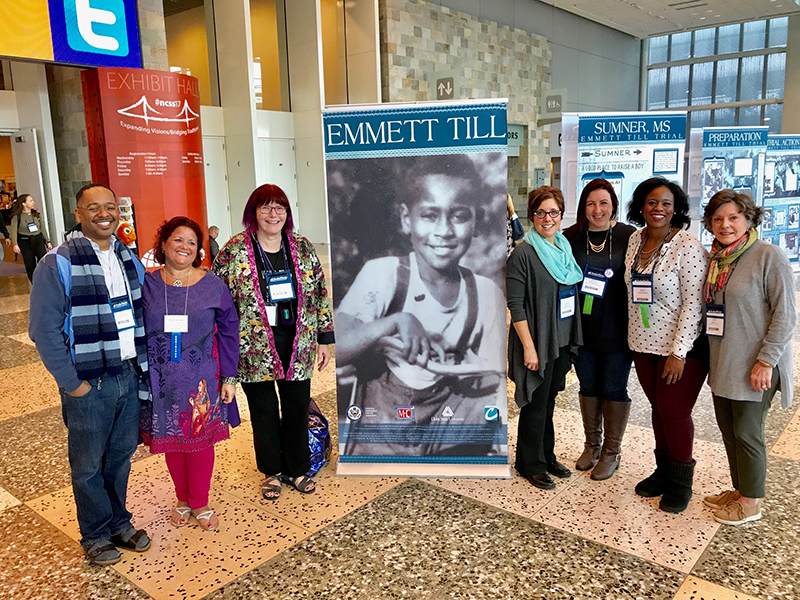 The Delta Center for Culture and Learning at Delta State recently attended the 97th annual Conference of the National Council for the Social Studies. The conference took place at the Moscone Center in San Francisco, California.

Delta Center staff members Dr. Rolando Herts and Lee Aylward promoted “The Most Southern Place on Earth: Music, Culture, and History of the Mississippi Delta” Institute funded by the National Endowment for the Humanities. Herts and Aylward are co-directors for the “Most Southern” Institute, which will be offered to K-12 educators from throughout the country at Delta State University.

The Delta Center teamed with “Most Southern” alumni Mary Heidi Imhof and Kelly Scanlon from Fairbanks, Alaska. Together, they presented on the educational significance of the “Most Southern” institute to K-12 educators, their students and their school communities.

Several other “Most Southern” alumni attended the conference, including educators from New Jersey, Massachusetts and California.

“The Delta Center’s mission is to promote the Mississippi Delta’s culture and history and its significance to the world,” said Herts. “We are pleased NEH has continued to help us fulfill this mission by supporting presentations of the ‘Most Southern’ institute at important educational conferences like the National Council for the Social Studies.”

In addition to a presentation session, The Delta Center displayed Delta State’s renowned Emmett Till traveling exhibit in the main lobby of the Moscone Center.

“The Emmett Till exhibit was a major draw for thousands of educators who attended the conference,” said Aylward. “Teachers from all over the country were reading the panels and taking pictures of them. This event provided excellent visibility for the ‘Most Southern’ institute and for the Mississippi Delta.”

Summer 2018 will be the ninth year that The Delta Center has offered “Most Southern.” Applications are being accepted now through March 1, 2018. The program has produced over 500 alumni nationwide who comprise a network of educational and cultural ambassadors for the Mississippi Delta National Heritage Area. Applications for the “Most Southern” Institute are being accepted now through March 1, 2018.

For educators who would like to display the Emmett Till traveling exhibit, contact Delta State University Archives & Museum at 662-846-4780, or visit https://www.deltastate.edu/academics/libraries/university-archives-museum/.

The mission of The Delta Center at Delta State is to promote greater understanding of Mississippi Delta culture and history and its significance to the world through education, partnerships and community engagement. The Delta Center serves as the management entity of the Mississippi Delta National Heritage Area and is the home of the International Delta Blues Project and the National Endowment for the Humanities “Most Southern Place on Earth” workshops. For more information, visit http://deltacenterdsu.com/.