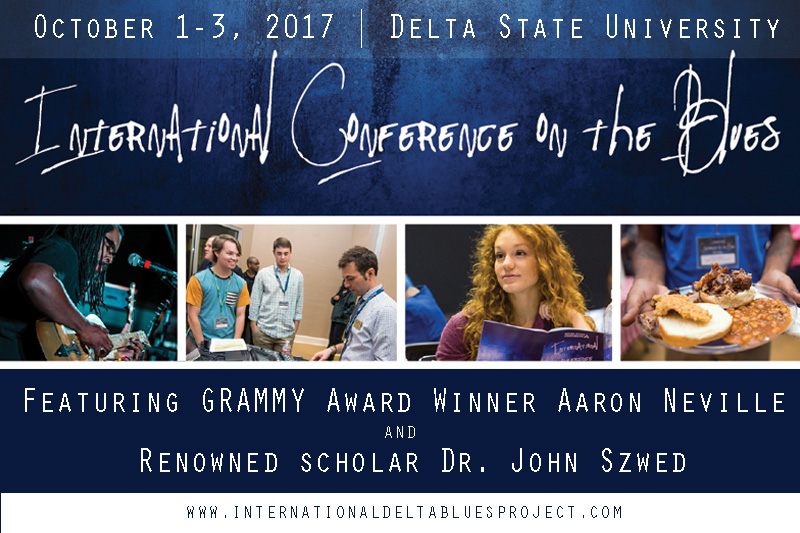 The fourth annual International Conference on the Blues at Delta State University is shaping up to be the best yet. This year’s lineup features GRAMMY winner Aaron Neville and has a two-part theme: Mississippi Delta native John Lee Hooker’s centennial birthday celebration in conjunction with GRAMMY Museum Mississippi and an exploration of ethnomusicologist Alan Lomax’s collection of Mississippi Delta blues and gospel recordings.

The conference is scheduled for Oct. 1-3.

The unique symposium brings together blues scholars, historians and fans from all over the United States in the heart of the Mississippi Delta, a place known as the epicenter of blues music and history.

To register for the conference, visit https://events.r20.constantcontact.com/register/eventReg?oeidk=a07ee79rfch3347d1e5&oseq=&c=&ch=. CEU credit is available for educators.

Among the highlights for this year’s schedule are:

“As the academic center of the Delta blues, Delta State is proud to host and sponsor this year’s blockbuster blues conference,” said Delta State President William N. LaForge. “With all the superb programming that is scheduled, this conference will not disappoint and is one not to be missed.”

In addition, the conference will announce a project funded by the National Endowment for the Arts that will bring Alan Lomax’s collection of Mississippi recordings back home to the region in partnership with the Association for Cultural Equity at Hunter College.

As part of celebrating this exciting new partnership, the conference will feature keynote speaker Dr. John Szwed. Szwed won the 2006 GRAMMY Award for Best Album Notes for “Jelly Roll Morton: The Complete Library of Congress Recordings,” a box set based on Lomax’s interviews with jazz great Jelly Roll Morton. Szwed is considered a leading authority on Lomax’s life and work. He is the John M. Musser Professor Emeritus of anthropology, African American studies and film studies at Yale University and an adjunct senior research scholar in the Center for Jazz Studies at Columbia University, where he previously served as the center’s director and professor of music and jazz studies.

“We are honored to have Dr. Szwed and representatives from the Association for Culture Equity join us this year to announce our Lomax Mississippi Collection partnership,” said Dr. Rolando Herts, director of The Delta Center. “We look forward to making early recordings of Delta-based blues and gospel singers available to their families and the communities that they called home.”

GRAMMY Museum Mississippi will be the site for much of the conference, including a specially curated exhibit on John Lee Hooker.

“When the initial conversation began for our museum to be the site of this year’s conference we were thrilled,” said Emily Havens, executive director of GRAMMY Museum Mississippi. “Our goal has always been to help give a better understanding of Mississippi’s role in music, and it makes complete sense for us to work with this conference to expand that mission.”

The conference is part of the International Delta Blues Project, which is funded by the Robert M. Hearin Foundation and is based at The Delta Center for Culture and Learning at Delta State. The conference is being managed by a team of campus and community collaborators including The Delta Center; the Delta Music Institute; the Department of Music; the Division of Languages & Literature; the Office of Institutional Grants; Cleveland Tourism; Visit Mississippi; the City of Cleveland; and Bolivar County.

Over 30 papers will be presented during conference sessions.

“I always marvel at the variety of scholars that our conference attracts,” said Dr. Shelley Collins, a professor in the Department of Music and conference co-chair. “With the conference focusing on both John Lee Hooker and Alan Lomax, we’re thrilled to have received a record number of paper submissions this year.”

Numerous opportunities to enjoy live music will also be available at this year’s conference. Monday night will feature a free concert in downtown Cleveland by Jontavious Willis, Marquise Knox and Kingfish Ingram. On Tuesday, Aaron Neville will be interviewed during a lunch conversation, and later that evening, he will perform at the Bologna Performing Arts Center. Conference registrants are eligible to receive a 10 percent discount on ticket prices for this special closing concert.

“Jontavious Willis, Marquise Knox and Kingfish Ingram playing John Lee Hooker songs and their solo and original sides is such a great tribute to both the past and future of the blues,” said Don Allan Mitchell, conference co-chair. “Their average age is 23, and their superb advocacy for blues, as especially relevant to modern African American culture, will especially resonate with our diverse audiences. And Aaron Neville — the man is a music legend and his experience, knowledge and talent will be such a great addition. With a record number of paper and presentation submissions for this year’s conference, and a first-rate lineup of both artists and scholars, there is nowhere to go but up.”