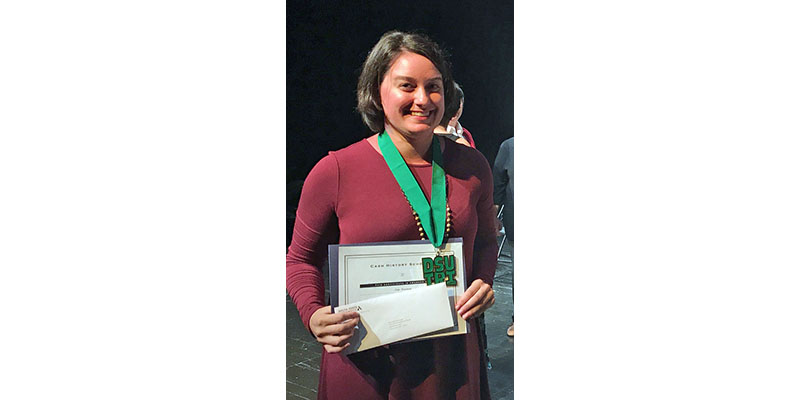 First attracted to Delta State’s swim program, recent graduate Erin Newman began her college career as a quiet freshman, but quickly found her voice through her passion for history.

Her professors are most impressed by her spirited discussions with both upperclassmen and instructors.

“She uses evidence to support logical arguments, proves her point in a quiet but effective manner, and often persuades others to embrace her perspective,” said Dr. Charles Westmoreland, assistant professor of history.

Given her stellar performance in the classroom, Erin has amassed a variety of academic honors at Delta State. Most recently, she was the recipient of the 2017 Jack Winton Gunn Award at this year’s College of Arts and Sciences awards program.

The Gunn Award is given for overall academic excellence in honor of the former dean of the university, and it is among the highest awards presented at Delta State.

Outside the classroom, Newman has also played an important role in preserving the history of Delta State and the surrounding region.

In the summer of 2015, she interned with University Archives and Museum, an experience which allowed her to assist in the development of the DSU 90th Anniversary Exhibit. Additionally, she has been a key contributor to two exhibits on sports history and culture, one of which was a Smithsonian traveling exhibit on display on campus in the fall of 2016.

In 2016, Newman took on extensive responsibilities in historical interpretation and preservation by serving as the program director at the Amzie Moore House Museum and Interpretive Center, a Cleveland historic site that interprets the life and legacy of civil rights leader Amzie Moore. Her work with the museum involved leading group tours and engaging in community outreach programs. 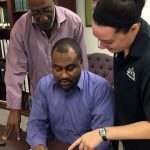 “Erin has made significant contributions to our mission to expand the legacy of Amzie Moore and the work of the civil rights movement in the Mississippi Delta,” said Will Hooker, Bolivar County administrator.

Emily Jones, university archivist, is grateful for Newman’s contributions to campus and community.

“From the beginning, Erin demonstrated initiative and a desire to learn more about the field of archive and museum studies,” said Jones. ”She has soaked up every opportunity, and now that hard work and drive is taking her down an amazing career path.”

Recently, Newman was accepted into the Museum Studies program at the University of Leicester in England, where she has been awarded a President’s Post-Graduate Scholarship for International Students.

To complement her formidable academic talents and community service, she has been a valued member of the Delta State swim team. She has served in a leadership capacity as the vice-chair of the Student Athlete Advisory Committee for the Gulf South Conference.

“Both inside and beyond the classroom, she has helped peers and younger colleagues as they seek to balance the challenges of academics and athletic competition,” added Jones. “Despite practicing several hours a day for the past four years, Erin has been one of the most accomplished students on this campus. She is a model scholar and campus citizen who has taken a vested interested in serving Cleveland and the entire region.”

Follow news of student success at Delta State at www.deltastate.edu.