Going A Different Kind of Green 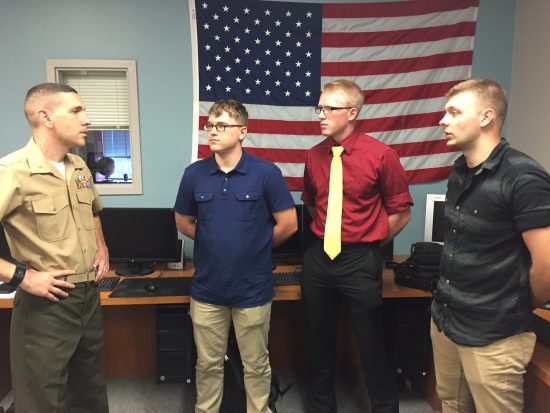 The Center for Interdisciplinary Geospatial Information Technologies at Delta State University has gained final authorization from the Southern Association of Colleges and Schools to offer a Bachelor’s of Applied Science in Geospatial Analysis and Intelligence (BAS-GAI).

“We wanted the richness of campus life, the ability to work as student employees on real-world projects in the Center’s lab, and the chance to interact with our peers” said Tanner Overcash.

As all three had completed the Marine Corps’ Basic Geographic Intelligence School with distinction, they were offered academic scholarships and student jobs by the Center. These student jobs became quickly became “real” when Major Michael Lorino, Tom Terry, and William Schouviller from the Intelligence Department at Headquarters Marine Corps flew in for a visit from the Pentagon during the first week of school. The latter universally expressed encouragement for the effort shown by these young Marines to advance both their education and ability to carry out the Marine Corps’ geospatial intelligence mission.

The BAS-GAI degree program teaches students to use spatial technologies – things like computerized mapping systems, GPS, satellite and aerial photography, and similar methods – as both methods and means to understanding problems from a geographic perspective.

This field of study is also relied upon heavily by investment firms, major insurance companies, the Homeland security and emergency response communities, utility companies, oil and gas firms, government, and more. The program is current accepting applications for Spring 2017 students and more information about this program and the Center may be found at http://gis.deltastate.edu