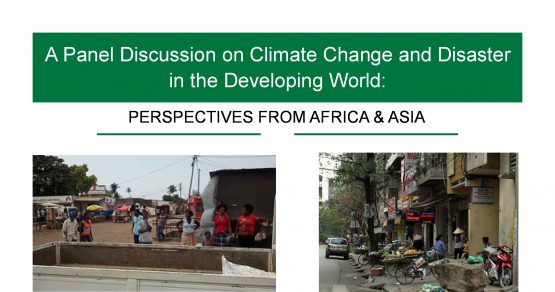 This year’s event is titled “A Panel Discussion on Climate Change and Disaster in the Developing World: Perspectives From Africa and Asia.”

Students, faculty, staff and the community are invited to attend this free event Oct. 5 from 7-9 p.m. in the Baioni Conference Center in Broom Hall.

The impressive panel features speakers from Vietnam, Mozambique and a United Nations member from China. Talbot Brooks, director of the GIT Center, will moderate the discussion. Panelists will discuss the challenges faced every day in their nations and their struggle to become more resilient.

“The event will focus on developing nations being particularly vulnerable to the effects of climate change and disaster,” said Brooks. “Their populations, economies and physical environments are often fragile, and due to scarcity of resources, less able to respond to and recover from crisis than those of the developed world.”

“It is not only in our national interest to support stability in these regions, but a moral obligation,” added Brooks. “For example, the U.S. does $38-43 billion in trade with Vietnam each year, and a substantial loss to their manufacturing base due to a crisis would have a significant and direct impact on our economy.”

Learn more about the event at: https://www.deltastate.edu/artsandsciences/geospatial-information-technologies/explore-the-center/events/perspectives-from-africa-and-asia/.