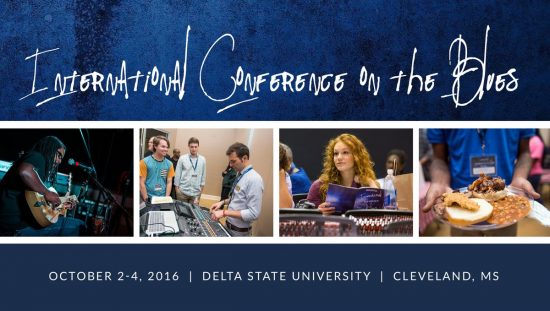 The conference, which is still open for registration, brings together Blues scholars, historians and fans from all over the United States in the heart of the Mississippi Delta, a place known as the epicenter of Blues music and history.

Among the highlights of this year’s International Conference on the Blues:

“Once again, the International Conference on the Blues is advancing partnerships and engaging diverse populations toward enhancing the educational and cultural climate at Delta State and in the broader community,” said Dr. Rolando Herts, director of The Delta Center for Culture and Learning, “We appreciate the involvement and support of various local, statewide, and national organizations including the Robert M. Hearin Foundation, the Dockery Farms Foundation, Entergy, Visit Mississippi, Nehi Bottling Company, GRAMMY Museum Mississippi, Bridging the Blues, Levitt AMP Series, and others that are making this great conference possible for a third year.”

The third annual conference is part of the International Delta Blues Project, which is funded by the Robert M. Hearin Foundation and is based at The Delta Center for Culture and Learning. The conference is being managed by a team of campus and community collaborators including the Delta Music Institute, the Department of Music, the Division of Languages & Literature, the Office of Institutional Grants, and Cleveland Tourism.

Lawrence “Boo” Mitchell began working with his father, producer and Royal Studios founder Willie Mitchell, at a young age, accumulating rare credits and abilities. His own career began at age 17 when he played keyboard on one of Al Green‘s gospel albums which later won a Grammy Award. In the early 90’s he began a role as a producer and engineer with credits on albums by artists such as John Mayer, Rod Stewart, Anthony Hamilton, Solomon Burke, William Bell and Cody Chestnutt, among others. After Willie’s death in 2010, Boo and his brother Archie continued their father’s legacy as owners of Royal Studios while maintaining their roles as producers and engineers. In 2016 his work as engineer / mixer on Mark Ronson and Bruno Mars’ hit “Uptown Funk” was recognized with a GRAMMY award for Record of the Year.

“Personally, Mr. Boo Mitchell defines cool for me,” said Don Allan Mitchell, co-chair of the conference. “I’ve met him on a couple of occasions, and he is so modest about his work. It still blows my mind when I see the clips of him on the GRAMMY stage with Bruno Mars. His keynote speech may well be his first formal academic address on the importance of the Blues in the American tradition, but I know he’ll perform like the consummate professional he is, with a quiet-spoken confidence and a wry sense of humor. It’s great to have him back in Cleveland.”

Grammy-nominee Cedric Burnside was born and raised around Holly Springs, Mississippi. He is the grandson of legendary R.L. Burnside and son of drummer Calvin Jackson. This four-time winner of the prestigious Blues Music Award’s Drummer of the Year (2010-2014) is widely regarded as one of the best drummers in the world and has begun to make a name for himself as a traditional blues guitarist as well. In addition to his grandfather R.L, Cedric has also played and recorded with countless musicians, including Junior Kimbrough, Kenny Brown, North Mississippi Allstars, Burnside Exploration, Widespread Panic, Jimmy Buffett, T Model Ford, Bobby Rush, Honey Boy Edwards, Hubert Sumlin, Galactic, Black Joe Lewis and the Honeybears, and The Jon Spencer Blues Explosion, among many others. In 2006, he was featured in Craig Brewer’s critically acclaimed feature film Black Snake Moan, playing drums alongside Samuel L. Jackson. (The film is a loose tribute to R.L. Burnside, and gives many nods to the late bluesman.) The Cedric Burnside Project’s latest album, Descendants of Hill Country, was nominated for a Grammy for Best Blues Album of the Year.

Burnside will perform an outdoor concert Monday night, and Monday morning will be interviewed by Don Allan Mitchell.

“Because of the GRAMMY-nomination, Mr. Burnside is in high demand as a performer this year, and I look forward to talking to him about his life on the road, and how the GRAMMY-nomination has influenced his career trajectory,” said Mitchell. “Hill Country Blues is a cousin of Mississippi Delta Blues, so it will be interesting to discuss the cross-influence with him. The International Conference on the Blues-sponsored Levitt Amp Performance on Monday night will be a great opportunity for our students and fellow Clevelanders to get their ‘full tilt boogie’ on. ”

This year’s conference promises to build on the vision established for the event when it began two years ago, and is a key component to Delta State’s pursuit of building a premiere curriculum around the art, culture, history and heritage of the Mississippi Delta.

“I am looking forward to the renewal of this fall signature conference on the blues, because it reinforces Delta State’s claim as the academic center of the blues,” said Delta State University President William N. LaForge. “It’s always exciting to hear the presentations and performances that highlight our conference. I know this October’s schedule, like those in the past that have been so successful, will not disappoint. I look forward to participating with all the visiting blues scholars and our faculty, staff and students during what will certainly be a wonderful program.

For more information, please contact Mitchell and Collins at blues@deltastate.edu.

The mission of The Delta Center is to promote greater understanding of Mississippi Delta culture and history and its significance to the world through education, partnerships and community engagement. The Delta Center is the home of the International Delta Blues Project and serves as the management entity of the Mississippi Delta National Heritage Area. For more information, visit https://www.deltastate.edu/academics/delta-center-for-culture-and-learning/