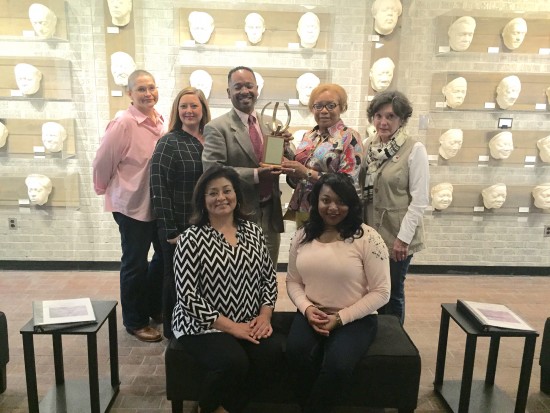 The Diversity Committee at Delta State University recently awarded the 2016 Georgene Clark Diversity Champion Award to The Delta Center for Culture and Learning.

The inaugural Diversity Champion Award was presented to Georgene Clark, retired assistant professor of English. The award was presented to Clark at the 2015 Winning the Race conference where it was announced that the award was being named in her honor. The annual conference promotes conversations between and among individuals and communities about race relations, social justice, diversity and inclusion.

This is the second year that the award has been presented, which was was established by Delta State University’s Diversity Committee to recognize individuals and divisions/departments that have made extraordinary efforts to promote diversity awareness at Delta State and in the broader community.

Dr. Temika Simmons and Dr. Garry Jennings, co-chairs for the 2016 Winning the Race conference, both praised The Delta Center for its commitment to diversity awareness.

“The Delta Center has been an active partner with the Winning the Race conference since it began three years ago,” said Simmons, assistant professor of psychology and recipient of the 2016 Mississippi Institutions of Higher Learning’s Award for Excellence in Diversity. “The Delta Center’s ongoing support of the conference, among several other projects and initiatives, is noteworthy and deserves the university-wide recognition that this award embodies.”

“The Delta Center’s collaboration is essential to the success of the Winning the Race Conference. It means that the conference has the support of an organization deeply involved with the culture, history and, most importantly, the soul of the Mississippi Delta,” said Jennings, professor of political science and director of the The Madison Center. “In keeping alive the history of this region, the Delta Center connects the past to our efforts in the present, building hope for justice in the future. This is essential for our work on the Winning the Race Conference.”

Arlene Sanders, instructor of political science and chair of the Diversity Committee, presented the award during the closing session of the 2016 Winning the Race conference.

“For several years, The Delta Center has offered programs that highlight the Mississippi Delta’s rich cultural diversity,” said Sanders. “They offer National Endowment for the Humanities workshops that attract educators from all over the country to learn about the Delta. They manage the Mississippi Delta National Heritage Area that offers programs like the Delta Jewels Oral History Partnership about African American church mothers. They direct an international blues project that highlights the global influence of blues music and culture. For these reasons and many more, The Delta Center is most deserving of this award.”

“The Delta Center is honored to receive the Georgene Clark Diversity Champion Award,” said Herts. “For over 15 years, The Delta Center has been promoting appreciation of the Mississippi Delta’s diverse culture and history as part of the American experience. That includes telling inclusive stories involving cultural perspectives regarding race, social injustice, civil rights, regional identity, and even expressions of faith.”

The Delta Center met the following criteria for the award: innovative teaching, educational programming, or activities designed to engender diversity within the classroom and/or curriculum at Delta State; a documented record of committee work, community involvement or outreach to the local community by a campus organization or department or division; and active leadership in promoting cultural diversity at Delta State.

To learn more about The Delta Center, visit http://deltacenterdsu.com/.

The mission of The Delta Center is to promote greater understanding of Mississippi Delta culture and history and its significance to the world through education, partnerships and community engagement. The center serves as the management entity of the Mississippi Delta National Heritage Area and is the home of the National Endowment for the Humanities “Most Southern Place on Earth” workshop and the International Delta Blues Project.