Off the heels of last year’s successful Winning the Race Conference, Delta State University is gearing up for the third year of the award-winning race relations symposium scheduled for March 28-29.

This year’s conference is titled “Winning the Race: Advancing Social Justice in Communities and Institutions.”

The inaugural program spearheaded by Delta State President William N. LaForge in 2014, was designed as an innovative academic conference, and the 2016 schedule promises to build on the meaningful dialogue presented at the previous conferences.

“Delta State is a cultural ‘mecca’ that champions and celebrates the multicultural identity of the Mississippi Delta, and provides leadership and programming for the community and region,” LaForge said of last year’s conference.

The schedule of events will place special emphasis on engaging campus and community dialogue regarding current issues related to social justice, and working to rekindle opportunities for municipalities of the Mississippi Delta to collaborate and promote racial healing.

Co-chairs for the conference are Dr. Temika Simmons, assistant professor of psychology, and Dr. Garry Jennings, professor of political science.

“In 2016, we are looking forward to expanded and depended conversations around social justice issues as a continuation of conversations held at previous conferences,” said Simmons. “Participants have asked for more information regarding how they can get more involved on campus and in their communities. This conference will provide that information.” 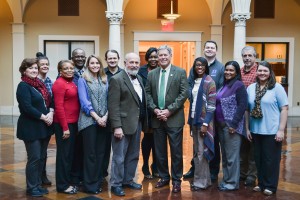 Two highlight speakers will be featured during this year’s schedule.

Tim Wise is the author of seven books, including his highly-acclaimed memoir, “White Like Me: Reflections on Race from a Privileged Son.” He has contributed chapters or essays to over 25 additional books and his writings are taught in colleges and universities across the nation. Wise appears regularly on CNN and MSNBC to discuss race issues.

Wise is among the nation’s most prominent antiracist essayists and educators and has spent the past 20 years speaking to audiences in all 50 states, on over 1,000 college and high school campuses, at hundreds of professional and academic conferences, and to community groups across the nation.

Ari Berman is a contributing writer for The Nation magazine and an investigative journalism fellow at The Nation Institute. He has written extensively about American politics, civil rights and the intersection of money and politics. His stories have appeared in the New York Times, Rolling Stone and The Guardian, and he is a frequent political commentator on MSNBC, C-Span and NPR.

His new book, “Give Us the Ballot: The Modern Struggle for Voting Rights in America,” was published in August 2015 by Farrar, Straus and Giroux. Berman graduated from the Medill School of Journalism at Northwestern University with a degree in journalism and political science. He lives in New York City.

Other event highlights include a special mayor’s roundtable, designed to provide a platform for local governmental leaders to discuss race and the challenges and successes they’ve experienced while leading and governing municipalities across the Delta.

The conference also features a student poster competition, a gallery talk and tour of the home of Amzie Moore, an African American civil rights leader and entrepreneur in the Delta whose home was declared a historical landmark in Cleveland in 2008. Breakout sessions feature topics covering social justice; civil rights and law; economic opportunities; education and community; and culture and community.

Simmons added that the conference allows the campus and community to focus on underreported positive race relations efforts across the nation.

“Over the past several years, tensions around race and ethnicity have increased nationwide,” she said. “Although there has been an increase in media coverage on many pervasive issues, not as much attention has been paid to the many individuals, organizations, movements and institutions that have played a critical role in helping people to fully understand and positively affect the current racial and cultural climate across the country.

“Delta State University, by way of this conference, has taken a bold, leading step in advancing a rich, academic and positive dialogue about not only what’s happening nationwide, but what’s happening on our campus and in our local Delta communities,” she added. “Given Mississippi’s current reputation regarding issues around race and race relations, it is important for an academic institution like Delta State to highlight — despite stereotypes — what is actually happening on the ground in our state, particularly in the Delta.”

The university’s Winning the Race committee developed the conference with three overarching goals: engage in conversations with campus and community constituencies that will build an appreciation for diversity differences and a spirit of community through shared ideas; promote a broad discourse on race relations by building conversations to bring together diverse communities in the Delta through sharing of ideas and building cooperation; and to rekindle a hope that Delta communities will move toward greater equality, forward and open thinking, while reducing racial disparities and tensions.

In its inaugural year, the conference received the 2014 Civil Rights and Social Justice award and was accepted by LaForge at the 4th National Civil Rights Conference in Philadelphia, Mississippi.

A finalized schedule of events is still in progress. All conference updates will be published at https://www.deltastate.edu/president/winning-the-race/.