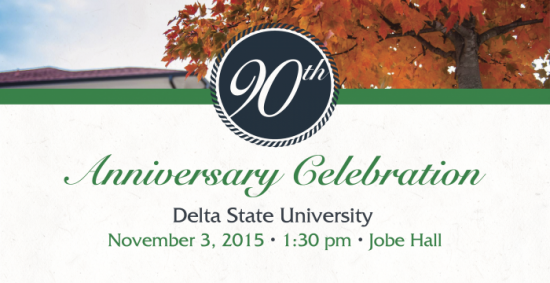 All friends and supporters of Delta State University are invited to a birthday celebration Nov. 3, as the university celebrates the 90th anniversary of its opening.

In 1924, two Mississippi senators introduced a bill to create Delta State Teachers College, which was signed by the governor on April 9. Just under a year later, James Wesley Broom was appointed the first president of the college, and the institution was formally opened on Sept. 15, 1925.

“Starting with just 11 faculty members and a fall enrollment of 97 students, the university has grown into a noted four-year institution that continues to educate some of the brightest students in the state,” said Delta State President William N. LaForge. “In addition, the university has developed into a center of excellence in areas such as business, aviation, nursing, music, entertainment industries, culture and more.”

LaForge, joined by members of the Dedicated Statesmen Association, invites everyone to attend the celebration which will get started at noon with the dedication of the newly-restored clock and Alumni Brick Plaza in front of Ward Hall.

The project is the first of 10 projects to be identified by the DSA committee, which includes both retired and current Delta State faculty and staff who have put many hours into planning the 90th celebration events.

The dedication will be followed by lunch on the quadrangle and then a program looking back at Delta State’s 90 years scheduled to start at 1:30 p.m. in the Jobe Hall Auditorium. Student and campus groups will pitch in on a number of campus beautification projects beginning at 3 p.m. Tuesday, including a project to repaint the footsteps marking the “Green Mile” on campus.

Other opportunities to reflect and celebrate the university’s history include a main gallery exhibition at the Charlie W. Capps, Jr. Archives and Museum on 90 years of Delta State students. The exhibit, under the direction of University Archivist Emily Jones, will explore how the student body grew from under 100 students as well as nine decades of academic achievements.

“We’re really driving home that this anniversary is about 90 years of celebrating students at Delta State,” said Jones. “We’ve had 90 years of people putting lots of energy and dedication into the university. We want to make sure that in another 90 years we have done as well as those who came before us. Collecting our history and knowing our foundations are essential.”

Leading up to the anniversary date, Jones has also been publishing “History Days,” a series of informative posters focusing on all things related to the student experience over the years. View the series at https://www.deltastate.edu/anniversary/history-days/.

James Robinson, president of the DSA committee, said he encourages everyone to take the time to join in the events on Nov. 3.

“We thank all those individuals and businesses who have helped organize the day’s events and who have provided gifts and prizes,” he said. “We want the day to be full of excitement and joy as we express our love for our alma mater.”

Stay up to date on all anniversary events and activities at https://www.deltastate.edu/anniversary. The public is encouraged to join the university as it continues to celebrate 90 years of excellence.