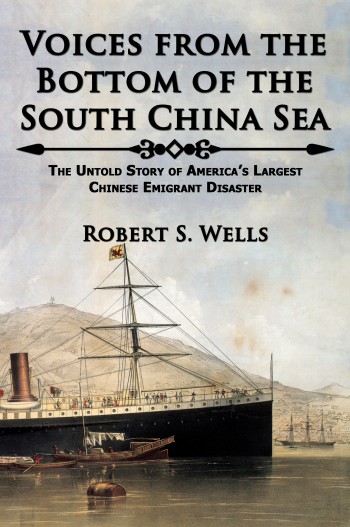 The event is free and open to the public.

“Voices from the Bottom of the South China Sea” is the remarkable, untold illustration of the bonds between Americans and Chinese, brought to life in the true story of a deadly 1874 shipwreck off Southern China that killed hundreds and scattered treasure in the South China Sea.

This amazing history involves a shipwreck, pirates and lost treasure. The work captures the shared passions, ambitions and animosities of Chinese and Americans seeking fortune in 19th century California.

With the lost records of the event recently discovered and pieced together by the author, a former navy captain who commanded a warship in the waters where Captain Warsaw’s ship went down, this book allows the lost voices to tell their story to the world from the bottom of the South China Sea.

Wells is retired from the U.S. Navy as a captain with a distinguished 30-year naval service career, which included command of the AEGIS cruiser USS LAKE CHAMPLAIN (CG-57) during Operation Enduring Freedom in the aftermath of 9-11, and the guided missile frigate USS LEWIS B. PULLER (FFG-23).

He also served as the U.S. Naval Academy’s director of professional development in Annapolis, Md. During his career, Wells was awarded 20 service medals including two Defense Superior Service medals and two Legions of Merit.

Wells’s keen interest in U.S.-China relations stems from service in U.S. Seventh Fleet operations in the South China Sea as U.S. host ship during the historic Chinese People Liberation Army-Navy visit to San Diego in March of 1997, and the development of defense policy between the U.S. and China in support of the state visit of China’s president to the U.S. in September of 2005.

Wells has written and spoken frequently about national security and foreign policy issues in national and local media. He lives in Northern Virginia with his wife, Christine. This is his first book.