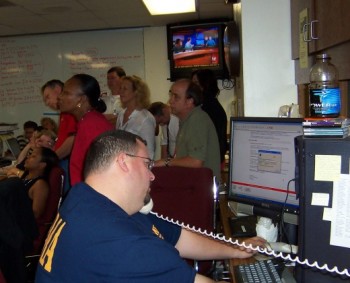 Less than a year after becoming the director of Delta State University’s Center for Interdisciplinary Geospatial Information Technologies in January of 2005, Talbot Brooks stepped up in a big way to help with devastating Hurricane Katrina.

This week marks the 10th anniversary of the heartbreaking day Katrina brutally swept across the southeastern U.S. The extraordinary storm system killed nearly 2,000 people, and effects of the hurricane are still visible in different ways today.

Brooks, who worked alongside Mississippi Emergency Management Agency, is remembered for the important role his storm surge prediction played with first responders on the Gulf Coast of Mississippi. The maps and information that he and his students continued to pump out hours after the storm’s landfall were also vital in post-Katrina relief efforts.

He was directly responsible for organizing hundreds of volunteers involved with first deployment. These volunteers came from across the nation, including Ohio, Missouri, Florida, North Carolina, Illinois, California, New York, Texas, Arkansas, Colorado and Mississippi.

Utilizing his expertise with mapping technology, Brooks helped translate more than 100 addresses/locations into GPS coordinates for the U.S. Coast Guard rescue helicopter evacuation missions. Many of these location-to-GPS translations could only be done fast enough using geographic information system technology.

“We built the initial indexed search maps for the initial responders and strike teams  — printed nearly 200 maps in under 10 hours,” said Brooks, who also helped finish a revised and expanded search map set that covered eight county areas and was used for house-to-house rescue efforts.

And in this role, Brooks realized the real need for better integration among GPS technologies and printed maps, particularly when coordinating search and rescue activities.

Ever since, he has worked with several GPS manufacturers to integrate disaster mapping standards such as the U.S. National Grid, intelligent GIS data collection, and emergency responder accountability with GPS technologies.

“The spirit of volunteerism is alive and well in the state of Mississippi,” said Brooks. “As volunteers, they were able to truly make a difference in the lives of their neighbors by bringing this technology to their search and rescue damage assessment and similar efforts. I’m honored to be associated with such a wonderful group of people.”

The mission of the center is to provide geospatial services, accessible education and training, and institutional knowledge for geospatial information technologies to the widest possible audience, and particularly, the mid-Delta region.