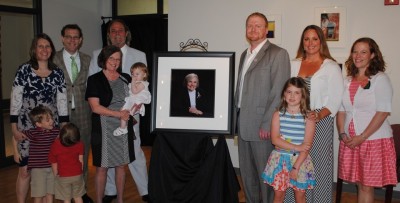 Family and friends gather in the Howorth Seminar Room to honor Dorothy Shawhan with the Woman of Achievement Award for 2015.

The award was initiated in 2000 with the 75th anniversary of Delta State to celebrate the achievement of Delta women. Judge Lucy Howorth endowed a program whereby women who have made significant contributions to life in the Delta and have served as ambassadors of the Delta to the world can be honored. University Archivist Emily Jones coordinates the selection and recognition of each recipient.

“Dorothy was the one who sent the first letters out asking for help in organizing the Howorth Woman of Achievement award in 2000. She was always working to encourage her students and peers and especially the women around her,” said Jones.

Shawhan served the Delta State community beginning in 1981 as an instructor in English and moved on to chair the Division of Languages and Literature in 1992.  Shawhan was the recipient of the Mississippi Humanities Council Teacher Award in 2004 and the S. E. Kossman Outstanding Faculty Award in 2006. She presented the keynote address at Delta State’s 2006 Fall Commencement. After retiring, Shawhan continued teaching part time as Professor Emeritus of English.

Shawhan’s family plans to donate her book collection, manuscripts, photographs and audio recordings to the University.

“This is a wonderful collection and what makes it even better is their desire to have Dorothy’s books installed in the Roberts-LaForge library collection so that the students will have easy access to these resources,” said Jones. “We have an exhibit of her memorabilia on display in the Archives, and there is a slide show created from a lifetime of photographs that runs daily. The exhibit and show will be available until July 30.”

A reception and portrait unveiling was held in the Lucy Somerville Howorth Seminar Room. The Timshel Book Club orchestrated and financed the renovation the seminar room in May to honor Shawhan, their friend and club member.

“It’s beautiful and a real tribute to all the women who have been inducted into this dedicated group of women since 2000,” said Jones.

For more information, contact the Archives at 662-846-4780 or email archives@deltastate.edu