By Delta StateMarch 20, 2015Alumni, College of Arts and Sciences 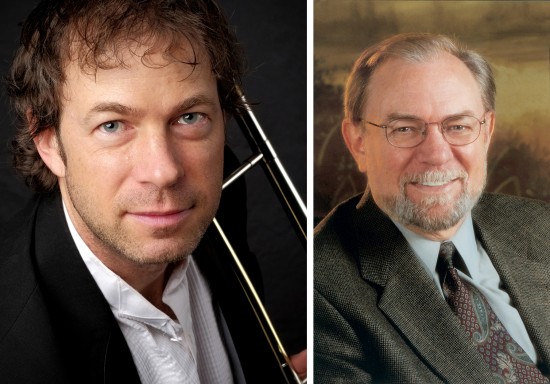 The Whitman College and Walla Walla Symphony presentation was a five-day music festival called “Music 360: ‘Looking Back…Reaching Forward: The Music of Samuel Jones.” The event featured some of the musical compositions of the award-winning Dr. Samuel Jones, Doug’s uncle.

Doug said the symphony has about five concerts a year to highlight different people. “This one was kind of special,” he said, since two Mississippi natives and relatives got to merge their talents on stage.

The title of the festival refers to how classical music has changed over the years.

“[Jones’] music stands for the type of music that was able to survive,” Doug said. “The pendulum always swings back.”

Doug, who grew up in Cleveland, has showcased his talent on the trombone and other instruments in various parts of the world, including Asia and the Middle East. He has worked alongside Arturo Sandoval as trombonist, the Gypsy All-Stars as a bassist and Shawn Lane as a keyboardist.

Currently, Doug is an assistant professor of music and director of Jazz Studies at Whitman College, where he has won three Down Beat jazz awards for his performances.

During his youth, he attended Cleveland public schools for 12 years and went on to become an honor graduate at Delta State University. At Delta State, he played trombone in the Delta State Band and played keyboard in Delta State’s Renaissance, a popular vocal group.

In preparation for the festival, Doug practiced and trained meticulously for his trombone solo.

“Musicians are like athletes in many ways,” he said. “There is an immense amount of training before they are seen by the public.”

His piece contained trills and extremely high and low notes, which made the concerto quite difficult.

The composer for the event, Jones, also hails from the Mississippi Delta. He spent part of his childhood in Indianola and graduated from Central High School in Jackson.

He earned his claim to fame working his way up the ranks as a conductor, eventually becoming the conductor of the major American orchestra Rochester Philharmonic. He later founded Rice University’s Shepherd School of Music, and he has composed a number of symphonies and chorus, opera and chamber group pieces.

Although some of his compositions are several decades old, “It’s all still as alive as the day I wrote,” said Jones.

Jones was thrilled with the festival performances and honored to take part in an event featuring his nephew.

“Everyone associated was terribly talented,” he said. “The Whitman college faculty are uniformly first class musicians. At the top of the list is Doug. Not only do we genetically bond, but the same is true musically as well.”

Doug’s father, Tony, could not be more proud of his son’s performance in conjunction with Jones.

“We just don’t have such things happen,” Tony said. “It’s a terrific honor for this area.”

Learn more about the festival at http://www.wwsymphony.org/2014-15-symphony-season/2015/2/25/music-360-looking-backreaching-forward-the-music-of-samuel-jones.