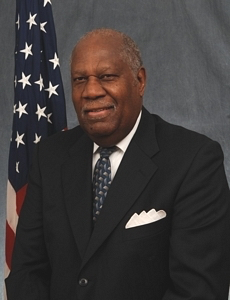 Robert G. Stanton, former director of the National Park Service, will be the featured guest at the opening reception for the Winning the Race Conference March 30 at 5:30 p.m. in the lobby of the Bologna Performing Arts Center.

Robert G. Stanton, the first African American director of the National Park Service, and former senior advisor to the Secretary of the U.S. Department of the Interior, will be the featured guest at the opening reception for the Winning the Race Conference March 30 at 5:30 p.m. in the lobby of the Bologna Performing Arts Center.

The reception is sponsored by the Mississippi Delta National Heritage Area (MDNHA) in partnership with the Delta Center for Culture and Learning at Delta State University. All events affiliated with the Winning the Race conference are free and open to the public.

The opening event will serve as a venue for both residents and visitors to meet Stanton and hear him speak about the MDNHA and the upcoming National Park Service Centennial in 2016.

“I was invited to the Delta when local leaders first announced interest in establishing a National Heritage Area here over a decade ago,” said Stanton, “I am honored to have been invited back to the region to participate in an event that promotes the Mississippi Delta.

“National Heritage Areas preserve and commemorate the nation’s rich and collective history and cultural heritage, and they are proven vehicles for partnerships, community engagement, diversity and inclusion. The Centennial’s primary goal is reconnecting the National Park Service with communities and people. These efforts go hand-in-hand, and I look forward to sharing this positive news in the Delta.”

Dr. John Hilpert, chairman of the MDNHA Board of Directors, and former Delta State president, is looking forward to bringing Stanton to campus.

“We are proud to provide this opportunity for Delta residents and guests to meet and interact with Robert Stanton,” said Hilpert. “As the first African American director of the National Park Service, Bob Stanton is a living historical figure. He has been a champion of diversity and inclusion throughout his career.

“He also is very committed to youth, using his deep knowledge of history and culture to educate and engage them. It is very fitting for him to participate in our reception, which is a collaboration among the Mississippi Delta National Heritage Area, the National Park Service, and the Winning the Race conference on race relations and diversity in the Delta and beyond.”

In addition to being the featured guest, afterwards, Stanton will serve on a panel with acclaimed author and entrepreneur Clifton Taulbert, Rose Flenorl of FedEx, and Tricia Walker, director of the Delta Music Institute. The panel will be moderated by Governor William Winter who served as the Mississippi’s 57th governor.

In 1997, Stanton was unanimously confirmed as the 15th director of the NPS. He served in that role until the end of the Clinton administration. He was the first director to undergo confirmation hearings before the U.S. Senate and the first African American to serve in this position since the NPS was established by Congressional legislation in 1916. Over his 35-year career with the NPS, he served in a number of management positions including park superintendent, deputy regional director, regional director and associate director.

Stanton has been recognized nationally through awards and citations for outstanding public service and leadership in conservation, historic preservation, youth programs, public and government relations, and diversity in employment and public programs. He has held professorships at Howard, Texas A&M and Yale universities and has been awarded five honorary doctorate degrees. He also remains a fan of Delta Blues music.

The MDNHA is a partnership between the people of the Mississippi Delta and the National Park Service. The MDNHA was designated by U.S. Congress in 2009 and is governed by a board of directors representing agencies and organizations defined in the Congressional legislation. More information about the MDNHA, including the complete approved management plan, is available at www.msdeltaheritage.com.

The mission of The Delta Center is to promote greater understanding of Mississippi Delta culture and history and its significance to the world through education, partnerships and community engagement. The Delta Center serves as the management entity of the MDNHA and is the home of the International Delta Blues Project. For more information, visit https://www.deltastate.edu/academics/delta-center-for-culture-and-learning/.

Follow all Winning the Race conference updates at https://www.deltastate.edu/winningtherace.