By December 18, 2014BEEP, Center for Community and Economic Development 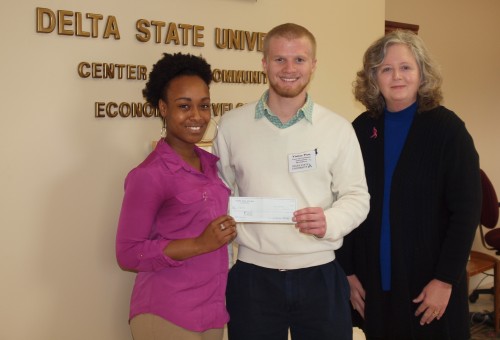 The Breast Education and Early-detection Project (B.E.E.P.) in the Center for Community and Economic Development at Delta State University received strong support this fall.

Delta State campus residents participated in a fund raising event during Breast Cancer Awareness Month. The residents of Brumby-Castle Hall made a donation from funds collected in the lobby. The proceeds benefited B.E.E.P.’s effort to raise awareness of breast cancer and breast health and increasing the number of women who adopt early cancer detection methods. B.E.E.P. Project Coordinator Gail Bailey also held a workshop on the importance of early detection for residents of Brumby-Castle Hall.

The Zeta Beta Chapter of Phi Kappa Alpha Fraternity at Delta State coordinated a fund raising event along with five other Greek organizations, including Sigma Alpha Epsilon, Kappa Sigma, Phi Mu Alpha, Kappa Alpha and Alpha Phi Alpha, to support B.E.E.P. Each organization nominated a member to serve as a candidate to be elected by the student body to wear a pink dress. The student body voted for the candidates through monetary donations. The candidate that received the largest amount in donations was elected to wear the pink dress.  A total of $542 was raised by the fundraiser to support breast cancer awareness efforts by B.E.E.P.

Hey Joe’s Restaurant of Cleveland recently made a contribution to the Breast Education Early Detection Project through a fundraising event. A total of $300 was raised by the restaurant to support breast cancer awareness.

As a community support effort, staff from B.E.E.P. attended the Veteran’s Day program held on the lawn of the Bolivar County Court House in Cleveland. City and county elected officials along with members of the Veterans of Foreign Wars (VFW) and the American Legion held a ceremony in memory and honor of those individuals from Bolivar County that have served in the armed forces.

The mission of the Breast Education and Early-detection Project is to “eradicate breast cancer as a life-threatening disease through provision of innovative and creative approaches in teaching breast cancer awareness and prevention to women within the Bolivar, Sunflower, and Washington County communities who have limited access to preventive care.”

B.E.E.P. started in January 2007 through funding provided by the Central Mississippi Steele Magnolias Affiliate of Susan G. Komen for the Cure Foundation. The project has been continuously funded since then. B.E.E.P. is well-known throughout communities across the Mississippi Delta and has developed into one of the top grassroots community health programs in the region. The Project is a community based health program that focuses on a year-long campaign to raise awareness about breast cancer, breast health, and the importance of early detection.