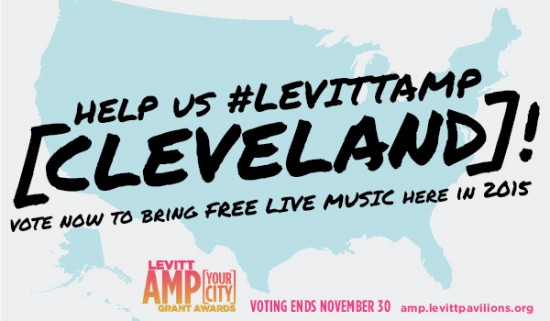 Delta State University is now in the running to bring a major 10-week live music series to Cleveland in the fall of 2015.

Sponsored by Levitt Pavilions, the only national network of outdoor music venues presenting free concert series, Delta State hopes to qualify as one of the 10 winning institutions competing in the Levitt AMP [Your City] Grant Awards.

The Levitt AMP [Your City] Grant Awards are an exciting, new matching grant opportunity created by LP to serve small to mid-sized cities up to 400,000 people. Ten nonprofits, or municipalities partnering with a nonprofit, will receive up to $25,000 each in matching funds to produce the Levitt AMP Music Series — an outdoor, free concert series featuring a diverse lineup of professional musicians.

The Delta State University Foundation submitted the application for Cleveland, coined Concerts on the Crosstie. It has been approved and is now posted on the Levitt Pavilions website for public viewing.

Robin Boyles, director of Delta State’s Office of Institutional Grants, said this is a great opportunity for both the university and local citizens.

“The concert series will be an opportunity to engage the entire community of Cleveland in advancing the creative place-making and creative economy of this great town,” said Boyles. “The railroad tracks that used to lie where the Crosstie Walking Trail is now once separated communities, neighborhoods and their people — now people will be coming together. It is fitting to hold a music series in this location as ‘music connects people.’”

A successful campaign for Delta State depends on campus and community participation to get as many online votes to bring the major music event to town. Community support, as measured by the number of online votes received, will be one of the key factors when Levitt Pavilions selects the 10 winners.

Delta State University Foundation asks supporters to start spreading the word to family, friends, colleagues and neighbors to rally the community to sign up and vote for Delta State’s proposal.

Boyles reiterated this is a chance for Cleveland’s entire population to unite for a unique musical experience.

“To be able to offer live music free to all socio-economic groups in a weekly series will be enriching, powerful and a way to engage the community in the excitement around the musical character that is growing here,” said Boyles.

Learn more about the opportunity at http://amp.levittpavilions.org/.