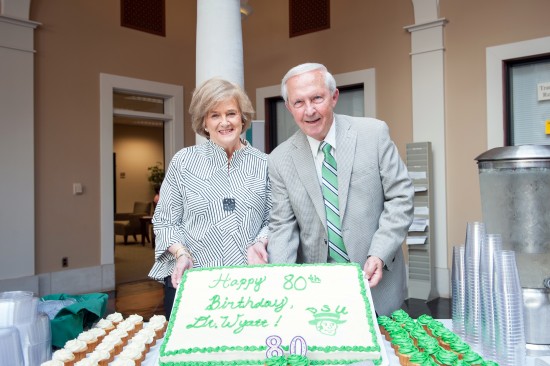 Some of Delta State’s most faithful alumni were on campus Tuesday to celebrate the 80th birthday of the university’s fifth president, Dr. Kent Wyatt.

Fittingly, the cake and ice cream party was held in the atrium of Kent Wyatt Hall, as the crowd was also filled with faculty, staff, friends, family and a number of community members.

“I’m turning 80, but I really do feel good,” said Wyatt. “This is a surprise to see so many folks here and it’s a great celebration. I really appreciate President LaForge, Dr. Roberts, Leigh Emerson and everyone who put this together for me.

“I’m having a great time visiting with my friends. It gives me a chance to reminisce and think about some good times I’ve had in the past. I look forward to some more good times in the future.”

Wyatt is celebrating another milestone this month, with 2014 marking 50 years of Delta State association. He moved to Cleveland at the age of 11 when his father took the head-coaching job for the Statesmen football team.

After graduating from Delta State, Wyatt eventually served under President James Ewing as alumni director and then as assistant to the president for both Ewing and Aubrey Lucas. Wyatt became the first alumnus chosen as president, serving in the role from 1975-1999.

Special recognition was given to Wyatt’s wife, Janice, who has been at his side through his entire Delta State career.

Also announced at the event was a major fundraising achievement made possible by Wyatt’s leadership. Several years ago, the institution and the Delta State University Foundation organized a university-wide comprehensive fund raising effort called the Campaign for Delta State — chaired by Wyatt and his longtime friend Ned Mitchell.

“Today I have the pleasure to announce that thanks in large part to Kent Wyatt, along with Ned Mitchell and the leadership of the Delta State University Foundation — and the tremendous efforts of so many alumni and friends — we have just exceeded our $40 million campaign goal for the Campaign for Delta State,” said President William N. LaForge.

“The campaign will officially come to a close at the end of this month, and we will enjoy a nice celebration at the end of the summer,” added LaForge. “I wanted to take this opportunity to thank you, Kent, for your leadership and involvement in this very special effort.”

LaForge provided another notable announcement in reference to a $10,000 gift he and First Lady Nancy LaForge made to the Foundation in April to celebrate the president’s one-year anniversary, which was made in honor of the Wyatt’s 50 years of service to Delta State.

“The Wyatts have decided they would like for this money to be used to support students who have demonstrated success and commitment in their coursework, and who would otherwise be unable to complete their education within a reasonable time to graduate,” said LaForge. “This is the first scholarship established for the retention of students.”

The affair concluded with a communal singing of Happy Birthday and an original song “Ode to Kent Wyatt” performed by LaForge and Delta Music Institute director Tricia Walker.

“Thank you for helping us celebrate Dr. Wyatt’s special birthday,” said LaForge. “I encourage you to help celebrate the importance of Dr. and Mrs. Wyatt to Delta State and the contributions they have made to this university by supporting the scholarship that has been established in their name.”