By Delta StateJune 3, 2014Alumni, College of Arts and Sciences 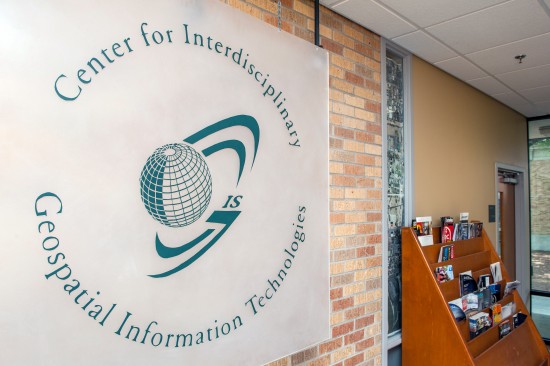 The Center for Interdisciplinary Geospatial Information Technologies at Delta State, now in its eighth year, continues to produce skillful graduates who serve Mississippi.

The Center for Interdisciplinary Geospatial Information Technologies (GIS) at Delta State University continues to make a mark across the state.

As an independent unit of Delta State’s College of Arts and Sciences, the center operates with a mission to provide geospatial services, accessible education and training and institutional knowledge for geospatial information technologies to the widest possible audience, and particularly, the mid-Delta region.

One major use for geospatial services — using the technology to make a difference during storms, disasters or crises, and partnering with institutions like the Mississippi Emergency Management Agency (MEMA).

With the program now in its eighth year, director Talbot Brooks is honored to see graduates applying what they’ve learned to assist Mississippi in times of need. Their presence was recently felt following the deadly tornadoes that struck the region late April.

“When the tornado hit Louisville, I came into the office and started putting out the word that we were available here to help, as we have in so many times past,” said Brooks. “However, 24 hours later, we still hadn’t received a call and my initial impression was a bit of heartbreak — thinking all that we’d worked for to instill the importance of GIS for a response to Louisville was forgotten by the wayside.”

Little did Brooks know, his phone didn’t ring because a few of his graduates — Mark Sanders, GIS administrator for MEMA; Toby Sanford; Scott Trapolino; and Jeff Smith — were already hard at work utilizing skills they developed at Delta State.

“I waited another day before starting to get a little uppity about it and I called Mark to politely tell him to get us in the game — there was much to do,” added Brooks. “His response floored me. Toby lived in the area and had been not only out working and mapping the destruction, but Scott was deployed there as part of a search and rescue team and putting his skills to use.

“Mark also let me know I might be able to help coordinate the transfer of imagery from some federal agencies to the state, but otherwise, I just wasn’t needed. It was then that I realized what a very long way we’ve come and how tremendously successful our program here truly is.”

Thanks to the center’s development, some GIS students have moved up to positions that play a big role in Mississippi emergency management. Sanders can speak of this firsthand.

“I think Delta State provided a good foundation in GIS practices that have helped to mold me into the GIS practitioner that I currently am,” said Sanders. “I think more of the credit goes to actually working in real-life emergency management scenarios with experienced GIS professionals like Talbot Brooks. Talbot’s phone is slow to ring during disasters now because he has done well to demonstrate best practices for the rest of us.”

Brooks’ leadership has also led to rapid program growth through a combination of creating new and unique course offerings, assistance in finding and landing grant and contract opportunities and other support.

“I actually think more can be done to market the GIS program at Delta State by expanding the current program to specific areas or disciplines used for GIS,” added Sanders. “For example, programs with tracks that are tailored to emergency management professionals, oil and gas, agriculture, homeland security or the fire service, to name a few.

“Delta State is strategically positioned in one of the most respected emergency management states in the U.S. I think more can be done to leverage this to bring students into the Deep South to study and research solutions to geospatial problems throughout the world.”

Brooks agreed, citing the role he and his students played during the devastation of Hurricane Katrina.

“One of the big lessons learned from Katrina was the difference that the use of spatial technologies could make during a crisis or disaster,” said Brooks. “We partnered with the Mississippi Automated Resource Information System to help conduct a needs assessment and draft a plan for building out GIS at MEMA.”

These type of efforts encouraged MEMA to bring Sanders on and embed GIS in everything it does — the management of every disaster in the state since 2007 has revolved around the use of a map.

“Personally, that’s one of the coolest things I’ve helped to accomplish in my career,” said Brooks. “But my proudest moment? Having taught these students and being able to see them do awesome things with what they’ve learned. I could not be more proud.”

For more info about opportunities and courses through the Center for Interdisciplinary Geospatial Information Technologies at Delta State, contact Brooks at tbrooks@deltastate.edu, or visit https://www.deltastate.edu/college-of-arts-and-sciences/center-for-interdisciplinary-geospatial-information-technologies/.