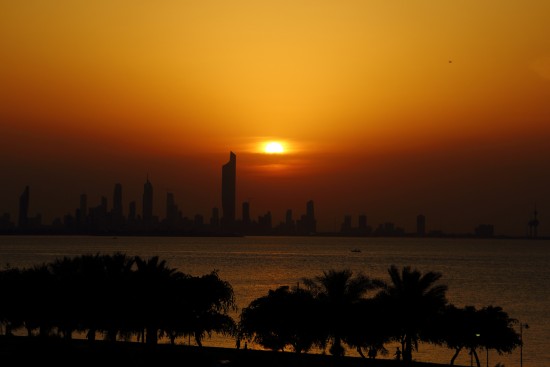 Talbot Brooks, director of the Center for Interdisciplinary Geospatial Information Technologies at Delta State, recently traveled to Kuwait to keynote a conference on geospatial information technologies. Brooks photographed the sun setting over Kuwait City. While the First Gulf War did tremendous damage to the city, reconstruction has allowed for a transition to a modern skyline with phenomenal buildings and architecture. The planning for such development is made possible through the use of geospatial technologies.

According to Talbot Brooks, director of the Center for Interdisciplinary Geospatial Information Technologies at Delta State University, the adoption and implementation of geospatial information technologies, both within the United States and abroad, is occurring at an extremely fast pace.

“One of the principal challenges faced by governments at all levels and locals is the prevention of duplication of effort and promoting coordination among departments and offices,” said Brooks. “This saves taxpayers tremendous quantities of money as it promotes a ‘buy it once, use it many times’ philosophy.

“By way of example, a department of transportation, a department of interior and a department of environmental quality might all need aerial photography. Rather than each purchasing this type of data independently for millions of dollars each, a coordinated effort would allow them to buy it once and split the cost three ways.”

The United States recognized this need early on and created the Federal Geographic Data Committee (FGDC) to coordinate such efforts at the federal level. These efforts are mirrored at the state level through the Mississippi Coordinating Council for Remote Sensing and GIS (MCCRSGIS). In each case, the lead executives from each governmental department meet on a regular basis to discuss geospatial needs and build collaborative efforts to meet mutual needs while saving taxpayer dollars.

Brooks serves as the chair of the Technical User’s Group for MCCRSGIS and is part of the advisory body for the FGDC. This experience, among many, has helped him gain a global reputation as an expert in spatial technologies and their implementation within government.

Brooks recently traveled to Kuwait at the request of the Kuwaiti Geographic Society and the government of Kuwait to keynote a GIS conference. Brooks focused on the benefits of geospatial technologies to society and the need for forming a collaborative body within their government that will coordinate geospatial activities in a means and manner similar to that performed by the FGDC.

His keynote presentation was televised nationally on Kuwaiti public television and he spent significant time with governmental leaders discussing how geospatial technologies may be used to promote economic growth and development.

“My visit to Kuwait was among the most enjoyable trips I’ve had thus far in my career,” said Brooks. “The hospitality was unrivaled, the people were incredibly friendly, and their willingness to not only adopt a coordinated approach to geospatial technologies within governance, but to strongly promote their use across all segments of society in very sophisticated means was unparalleled.

“It’s easy to see an Arab in traditional dress and make the assumption that they are perhaps not the most sophisticated users of technology. That would be a grave mistake as we have much to learn about the many cutting edge ways they are already using it to grow their economy and improve the lifestyles of all citizens.”

Brooks plans to return in January for a second meeting and hopes to bring a few select students with him in an effort to start an exchange program and to attract Kuwaiti students to Delta State.

“The potential investment in research and development programs centered on the use of spatial technologies within the oil and gas industry would complement emerging needs here in Mississippi as new wells are drilled in the southwestern and northeastern parts of the state,” he added.

To learn more about the Center for Interdisciplinary Geospatial Information Technologies at Delta State, visit https://www.deltastate.edu/college-of-arts-and-sciences/center-for-interdisciplinary-geospatial-information-technologies.