More than half of presidential history 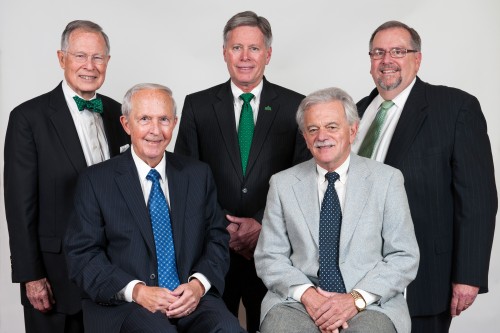 Amidst all the energy and excitement during the inauguration week of Delta State University President William N. LaForge, one quick gathering brought together more than half of the university’s presidential history.

The five living Delta State presidents managed to assemble on Nov. 1 for a private portrait following the Delegate’s Breakfast, shortly before LaForge was officially honored as the institution’s eighth president.

“At the institutional level, it was a wonderful tribute to Delta State to have the four previous living leaders here to join in as we celebrated excellence,” said LaForge. “The photo was a unique moment because so much of the history of Delta State was encapsulated in one space and one moment in time.”

Hilpert, who passed the torch to LaForge after leading the green and white for 10 years, said he was thrilled to be associated with the presidential past and present.

“I enjoyed seeing colleagues who also served as presidents of Delta State,” said Hilpert. “During our years of service, each of us met particular challenges and mined unique opportunities. Events prompted our decisions, and the efforts of the university community led to any and all successes.

“I join everyone in well wishes for the future.”

Potter, who served from 1999-2002, said Delta State’s future is bright in the hands of its new leader.

“I think the board made an excellent choice in President LaForge,” said Potter. “He knows the institution and its place in the Delta community, has an impressive statewide network of relationships from his years in D.C., and has strong academic credentials as well.

“In his inauguration speech, he articulated a strategy for development of the university that is right on target given the challenges Delta State faces — a remarkable understanding of the issues given the short time he has been in office.”

Wyatt (1975-1999), who remains a constant figure of support to the university, was reminded of the distinct connection the five share.

“It was very special for me coming together like that because I have served with all four of them,” said Wyatt. “I was an administrative assistant for Aubrey Lucas, and of course, served as President Emeritus with David Potter, John Hilpert and now, Bill LaForge.

“I feel fortunate to have become friends with this distinguished group of gentlemen, each providing unique leadership to Delta State.”

Wyatt added that the highlight of inauguration week was witnessing the official investiture and seeing LaForge take the realms of the beloved institution.

“I look forward to lending my voice in support of President LaForge’s quest for excellence in all of Delta State’s endeavors.”

For Lucas, who served from 1971-1975, convening for the photo provided a humorous realization.

“I’m getting older — all of them arrived at Delta State after I was there,” joked Lucas. “Being together gave me a sense of history and also reminded me, that through the years, Delta State has been blessed by the people of the institution who have wanted to serve it well.”

According to LaForge, it is his true honor to follow in the footsteps of the group’s great commitment. All of the past presidents have been faithful advisors in his transition.

“There are three moments that stick out as highlights during inauguration week,” said LaForge. “The first being when the picture was taken. I think it gave all of us a sense of pride by representing generations of leadership at Delta State.

“Second, when we were robing. Each of them came up to me to wish me well before the ceremony. And third, looking over at them all together on stage just after my investiture — it made me realize what a responsibility this is, and I thank them for their guidance.”

While it was just a brief occasion during the hectic inauguration schedule, the portrait brought all five leaders together for a notable presidential moment in Delta State history.

“It was extremely special to have all of them here for inauguration,” said LaForge. “They showed flags of unity and solidarity — as the Delta State family always should.”