By November 7, 2013College of Arts and Sciences 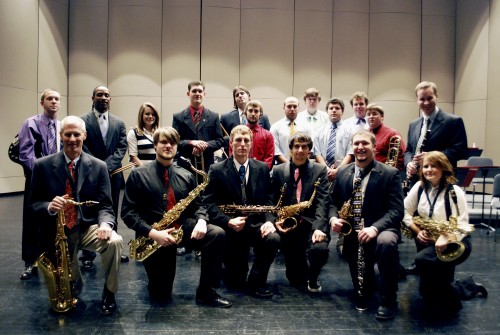 The Delta State University Jazz Ensemble will present its annual fall concert at 7:30 p.m. on Nov. 15 in the Delta and Pine Land Theatre of the Bologna Performing Arts Center.

The Jazz Ensemble is a 16-piece “big band” made up of music majors and non-music majors selected by competitive audition. The band is under the direction of Assistant Professor of Music Dr. Bret Pimentel and is known in the community for its annual Big Band Bash fundraiser, an evening of dining, dancing and classic Swing Era music.

Big band jazz is characterized by tightly coordinated, high-energy playing from a large horn section made up of trumpets, trombones and saxophones, working in partnership with a powerful, driving rhythm section of keyboards, bass and drums. Individual group members often perform solos that are improvised, or composed spontaneously in live performance.

The Jazz Ensemble’s collection includes favorites from the Swing Era of the 30s and 40s as well as more contemporary jazz styles from the 50s to the present. This year’s fall concert lineup includes new and classic swing music by great composers and arrangers like Sammy Nestico and Gordon Goodwin, music influenced by Brazilian and Afro-Cuban sounds and tastes of funk, gospel and the blues. The concert will feature a large number of talented student and community soloists.

The concert is free and open to the public. For more information on the Department of Music and bands at Delta State, please contact 662-846-4615.