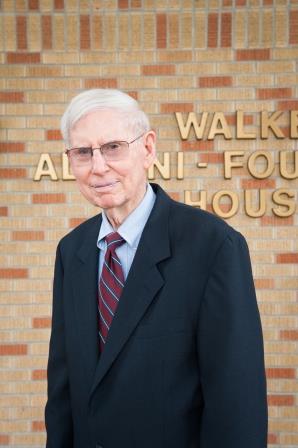 “Hugh Ellis Walker epitomizes what a Statesmen should be — a class gentleman with a sincere passion for Delta State. If you cut him, he bleeds GREEN! I have never known a person that cares more about Delta State than Hugh Ellis. No one deserves this honor as our distinguished alumnus more than this man.” – Wayne Blansett, vice president of student affairs at Delta State University.

Hugh Ellis Walker came to Delta State Teachers College in 1949. The Drew, Miss. native and Clarksdale High School graduate had just finished a stint with the United States Marine Corps and a semester at Northwest Junior College where he played football. As a student at Delta State, Walker stayed involved in various activities. He lettered in both football and tennis, was president of the Student Government Association, president of the Mississippi Collegiate Council and was named Mr. Delta State. While all of these honors were important to Walker, his favorite memory at Delta State does not involve any of these.

“I guess the greatest experience I had was the first morning that I walked out of the dorm, I met a girl named Eloise Stratton. She was the first girl I met at Delta State and I never dated anybody else,” said Walker. “We were married between my junior and senior year.” And they are still married to this day.

After completing his degree in biology and physical education, Walker set his sights on coaching football. He was head football coach, athletic director and taught biology at Durant High School, Louisville High School and Indianola High School. Walker later moved his family to Clinton, Miss. where he hung up his coaching hat and worked for an insurance company in Jackson for nine years before getting the call he had been waiting for.

“I had a dream all my life that I would be able to come back to Delta State,” said Walker. “I came back in 1969 as the alumni secretary, which was what the director was called then, and Coach Ferriss was the Foundation Director.”

After Ferriss retired, the two offices were combined and Walker was named the director of the Alumni and Foundation.

“I guess it is probably true with most universities, but Delta State is such a good place to work. It’s almost a shame that you get paid for the job because there’s so many fringe benefits,” he said.

Walker served as the alumni secretary from 1969-1987, and the director of the Alumni and Foundation from 1987-1993. His contributions while working at Delta State can literally be seen on campus with the establishment of the Hugh Ellis Walker Alumni-Foundation House.

“When we started the project, we were on the third floor of the union and we were supposed to serve the public, but no one would ever come up there,” he explained.

“It put us on the map,” he said. “There was a renewed interest among alumni. They felt like they had something of their own, and I did too. Being a ‘visitor’s center’ is the best advantage we got out of it.”

The ever-modest Walker insists that it was an initiative of alumni and friends — “people who loved Delta State.” The building was eventually named for him.

“Most everyone has a need and practically no one would have their college fully-funded before they come, and that’s why those scholarships help,” he said.

The one-time $500 scholarships are now funded by dues-paying members to the Alumni Association. Walker still comes to meet with the scholarship recipients each year.

Another contribution Walker made to Delta State is Pig Pickin’. They had been looking for an activity for the first home football game, and after learning about the idea from a CASE Conference roundtable discussion, they decided to give it a try.

“The timing seemed to be right,” said Walker. “It just so happened that a guy named Font Ray Armstrong owned the Pig Pen, and he went to Memphis and won the Memphis in May contest. We got him to sponsor and to cook, so we had a boost by him since he had won. It’s gradually improved and it’s the way it is now. They have taken Pig Pickin’ and run with it to the point that it’s a major function on campus.”

Walker’s love for his alma mater is evident in everyone who meets him. He and Eloise still attend almost every event on campus. His dedication to Delta State sets him apart as the Outstanding Alumnus of the Year. Walker was very humbled when he was chosen.

“Everybody has something in their life that’s important to them and anything relative to that usually is an emotional thing,” he said. “It’s very important to me that friends would recommend me for an honor like this. I think most people who work out here feel like Delta State is a very vital part of their life. When you get recognition for things like this that mean that much to you, it’s important.”

Mr. Walker will be honored during Homecoming on Friday, Nov. 1 at the Alumni Awards and Gala Dinner at 7 p.m. in the Walter Sillers Coliseum. Tickets for the event are $20 and can be purchased at the Hugh Ellis Walker Alumni House or online at www.deltastategiving.org/alumniassociation/homecoming2013.